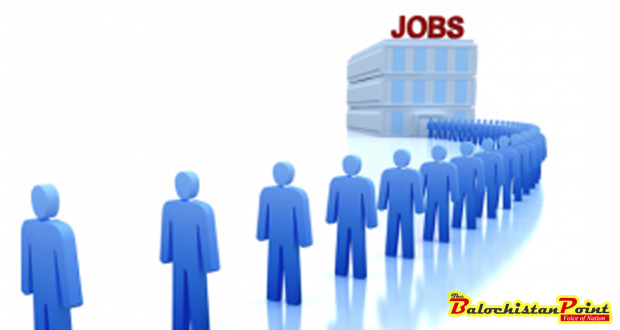 Curse of Unemployment in Balochistan

Youths in Balochistan are frustrated and disappointed with rampant unemployment.

Before taking admission they think that, is there any scope of this field? Is there any opportunity of jobs of that field? They are compelled to sacrifice their favorite field and choose any other field in which they don’t have any interest and take admission on that field because they can get a job easily.

There are many talented young men who have left their studies just because they know they won’t get jobs then why should they study and waste their precious time. They have started small businesses in the youth of their life.

Even though there are many intelligent persons who have completed their post-graduation long time ago, but yet they are also jobless.

Candidates for most of jobs are being recruited on nepotism, even peon or driver jobs are also given to people based on favoritism. Many times candidates have been asked for money during interviews. Departmental posts which are under jurisdiction of minister are given to the relatives of minister and party members.

Consequently, many young candidates are compelled to work in private sector for meager salaries of 4 to 5 thousands. They have no other choice but work all month and get paid even less than the government sanctioned minimum wage.

Most of unemployed persons get depressed with their life. Due to being unemployed they feel their life to be a burden and then they commit suicide. The rate of suicide is increasing day by day.  According to World Health Organization (WHO) suicide rate in Pakistan is 9.3 per 100,000 persons. Pakistan is on 76th ranking on the list of suicides all over the world.

On the other hand many young people would end up being drug addicts. Usually being jobless they are free so they need a society to pass their time. There is a greater amount of chance that they hook up with friends with ill-manners and anti-social habits. As a result they start smoking, during alcoholic and eventually get addicted with life destroying drugs such as heroine.

It is the duty of government and responsible authorities to think about youth and also to create more and more jobs opportunities for the youths. They should get an opportunity to show case their brilliance for the development of this region. Recruitment on every job must be on merit and there should be justice with each and everyone.

Published in The Balochistan Point on October 3, 2015