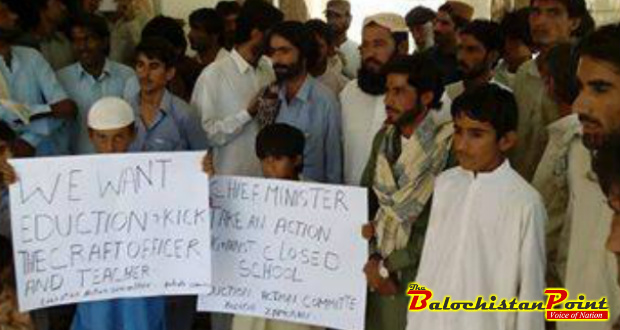 Turbat: Sit-in Protest Against Closure of Schools in Zamuran

Quetta – Students of Zamuran area in Buleda Tehsil hold a Sit-in demonstration outside office of Deputy Commissioner Kech, on Friday.

Students are protesting against closure of schools due to non-availability of teachers in 7 Union councils of Zamuran locality.

Civil society also participated in the protest and expressed solidarity with students.

Teachers posted in schools of Zamuran are not locals and therefore they don’t perform duties in the remote regions which has resulted in closure of schools, learnt Balochistan Point.

Following is the charter of demands by protestors:

“We have held several meetings with government officers relating to this issue but they only stall the matter,” lamented the protestors. “We demand that Chief Minister Balochistan himself take action on our demands,” said the protestors.

Protestors have warned to prolong their protest if government of Balochistan did not take action on their demands.

Published in The Balochistan Point on October 3, 2015

Education Turbat 2015-10-03
Editor
Previous: Polio Workers: Death-Defying Job but No Wages on Time
Next: Curse of Unemployment in Balochistan