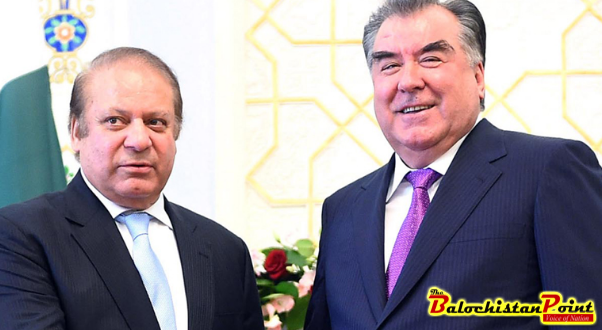 PUGUS: The leaders of Pakistan, Tajikistan, Afghanistan and Kyrgyzstan met here Thursday to review the progress on the US 1.2 billion dollar CASA-1000 project and vowed to take all measures for its early completion.

The quadrilateral project would allow export of 1300 MW of Central Asian electricity to Afghanistan and Pakistan by 2018.

The leaders gathered here at the mountainous resort, 36 kms from Dushanbe, and along the gushing waters of the Varzob river, discussed the ambitious project that would generate clean electricity through immense hydel resources.

The leaders had launched the project in May 2016, terming it a “win-win and mutually rewarding” for all stakeholder states.

Although conceived long ago, the government of Prime Minister Nawaz Sharif took the initiative to expedite the project leading to the historic agreement in Istanbul.

Prime Minister Nawaz Sharif termed CASA-1000 a flagship project in the region, and said upon completion would bring a number of economic, social and environmental benefits to member countries.

He said it would reduce the energy deficit, create jobs, improve trade and reduce carbon dioxide emissions, besides contributing to regional integration.

“We must make efforts to ensure that the project is completed well in time,” the Prime Minister said.

“It will be a good example of promoting cooperation between energy- deficient South Asia and energy-rich Central Asia,” he said.

He expressed the hope that the CASA-1000 Power Project would not only bring revenues to Tajikistan and Kyrgyzstan but also mitigate electricity shortages in Pakistan and Afghanistan and increase prospects for growth.

He reiterated commitment of the Government of Pakistan to the early implementation of the project.

“We need energy for socio-economic development in Pakistan and to run our industrial sector to its full potential” he said.

He hoped it would help in generating employment and uplift standard of living of the people of Pakistan.

He said CASA-1000 would also be a source of revenue for Afghanistan and open up greater business and investment opportunities.

Prime Minister Sharif said it was heartening to know that five companies, all leading manufacturers like ABB, Seimens, Alstonetc, have submitted bids for convertor stations to be setup at the end of the transmission line.

He said tenders had been floated for transmission lines from Kyrgyzstan to Tajikistan and from Tajikistan to Afghanistan and were being evaluated.

“I hope that work on these transmission lines would begin very soon,” the Prime Minister said.

He also extended gratitude to President Emomali Rahmon and his dedicated team for excellent arrangements for the briefing session and work accomplished since launching of CASA-1000 Power Project last year.

The CASA-1000 project is scheduled for completion by 2018 under the umbrella of the World Bank. Tajikistan share in the energy export will be 70 percent while Kyrgyzstan will export 30 percent of electricity. Afghanistan will consume 300 MW of the exported energy while Pakistan will receive 1000 MW electricity.

The project is expected to boost energy trade in the region and would lead to sustainable development.

Under the project, a total of 1,300MW will be produced by Tajikistan and Kyrgyzstan and would allow over 5 billion kilowatt-hours power for Pakistan and Afghanistan annually.

Tajikistan has surplus hydel electricity generation in summer with only five per cent of it being used, while the rest can be used to benefit the neighbouring countries.

Tajikistan tops Central Asia for hydro energy resources. Its 948 rivers have a total length of 28,500 km. It has half of Central Asia’s ice-covered land with over 8,000 glaciers.

The transmission line originating from the Kyrgyz substation at Datka will run through Tajikistan’s substations of Sughda, Dushanbe, Regar and Sangtuda and then pass through Afghanistan to Pakistan with a converter station at Nowshera.

The Prime Minister is on a two-day visit to Tajkistan and is accompanied by his Adviser on Foreign Affairs Sartaj Aziz, Minister for Water and Power Khawaja Asif and Minister for Commerce Khurram Dastagir.( APP)

Published in The Balochistan Point on July 6, 2017