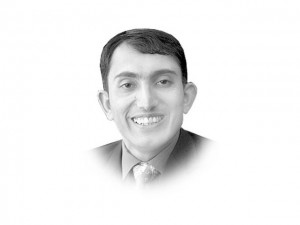 On  May 1, 2013, a full-page ad in Pakistan’s Dawnnewspaper read: “My Dear Pakistanis, have you thought why PPP, ANP and MQM are targeted?”

The ad was referring to three secular political parties, the Pakistan People’s Party (PPP), the Awami National Party (ANP.) and the Muthida Quami Movement (MQM). The three parties formed a coalition that ran the previous national government from 2008 to 2012. It was the first elected civilian government in Pakistan’s history that completed a five-year term and transferred powers to an interim government. Two weeks later, 90 million Pakistanis will vote on May 11 but the secular parties are finding it extremely difficult to return to power.

They have come under extraordinary deadly attacks from the Pakistani Taliban. Their election candidates have been assassinated and campaign rallies bombed. The attacks are endless and beyond one particular province or city.

In the past, political rivals were thrown out of power either through coups staged by the powerful military or through the ballot in elections. It is the first time that political opponents are being kicked out of the electoral race through brazen use of violence. The fact that Pakistan is heading toward elections is encouraging but the fact that secular and progressive parties are flatly denied a level playing field indeed makes these the most unfair elections in Pakistan’s history. All signs show that the Pakistani military, with its old ties with extremist Islamic groups and parties, is engineering such a selection process under the disguise of “elections” that will produce a right-wing, anti-U.S. government to influence the country’s policies in the wake of the end of the war in Afghanistan.

On the contrary, political parties, such as the Pakistan Muslim League of former prime ministerNawaz Sharif and the Pakistan Tehrik-e-Insaf of retired cricket hero Imran Khan have been completely exempted from the Taliban assaults. The two parties sympathize with the Pakistani and Afghan Taliban and encourage negotiations with them. Based on their ability to freely campaign ahead of the elections without any fear of a Taliban attack, the PML-N and the PTI are likely to gain remarkable election, although undue, gains at the cost of fear created against the three secular parties.

This is an unprecedented phenomenon in Pakistani politics which should worry the nuclear armed Muslim nation’s democratic neighbors, such as India, and western friends, particularly the United States and the European Union.

As deadly attacks restrict secular parties’ movement, they use advertising as a tool to reach out to their voters. For example, the ad published in the Dawn newspaper said the secular parties were being punished for their commitment to the war on terror and Islamic extremism.

Lastly, the ad asked the voters: “Do You Want To Surrender or Emerge Victorious Against Terrorism? The Choice Is Yours!”

The U.S. State Department has clearly stated that the United States has no favorites in Pakistan’s elections. However, Lisa Curtis, a senior research fellow at the Heritage Foundation, has rightly observed in her April 29 article “Pakistan’s Troubled Election” in the National Interest:

“American officials must weigh this compulsion with the reality that moderate and liberal Pakistani leaders rely on the U.S. to actively promote democratic ideals, such as freedom of speech and religion, rule of law, and respect for a credible and fair electoral process.”

The United States’ absolute silence and neutrality on the Pakistani elections is not helpful. There have been too many deadly attacks on secular parties in Pakistan and Washington must urge Islamabad to end this cycle of violence against certain political parties.

General Ashfaq Parvez Kayani, the powerful head of Pakistan’s military, has taken a partisan position in support of the Islamic parties against those who wish to make Pakistan a secular, democratic nation.

On April 21, while speaking at the Pakistan Military Academy (PMA), General Kayani asserted his vision for an Islamic Pakistan.

“Pakistan was created in the name of Islam and Islam could never be taken out of Pakistan and Islam should always remain a unifying force.”

The general’s comments give credence to the Taliban stance as they also strive to transform Pakistan into a full-fledged Islamic state.

The army’s vocal support for Islam and Washington’s quietness has led some secular Pakistani politicians to conclude, probably incorrectly, that the United States is also supporting the Taliban in their attacks on the liberal politicians. For example, Dr. Farooq Sattar, a former senator from the MQM, said on Tuesday that he believed that the western powers “wanted to bring a government of rightwing parties just to ensure their safe exit from Afghanistan.”

Mere elections will not put Pakistan on the path to democracy and the rule of law. Elections that do not provide equal space to all parties to contest will have no legitimacy and credibility. The people of Pakistan have immeasurably suffered because of their military’s covert contacts and support for the Taliban and other extremist groups. A military-backed new front that provides the Taliban and their supporters a democratic umbrella will weaken the foundations of the Pakistani state and its commitment to the fundamental principles of democracy. For the United States, secular parties are its last allies left in Pakistan. They must not be left in the lurch. (Courtesy: Huffington Post)

2013-06-21
admin
Previous: Balochistan Under Siege
Next: Hindus Are Treated As Second Class Citizens