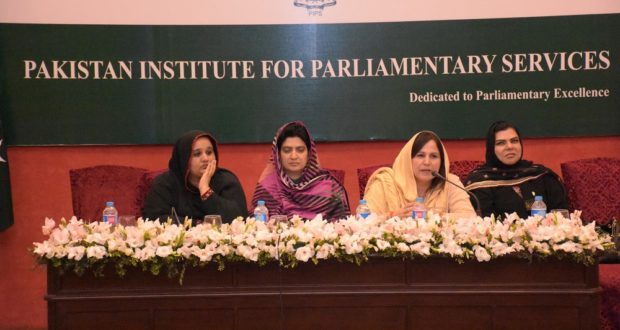 Speaking on the campaign theme ‘Domestic Violence Hurts Us All’, Oxfam Country Director Mohammed Qazilbash said, “Oxfam views violence against women and girls as one of the most significant barriers to our mission to end poverty. Domestic violence destroys the lives of victims, breaks families and communities, undermines development and the efforts to build strong democracies and just and peaceful societies.”

PIPS Executive Director welcomed the participants and said, “The Parliament has blurred party lines to work for women’s rights and in the WPC we see the coming together of women parliamentarians from various parties and this is commendable. So the civil society must work with the members of the caucus to bring in pro-women laws.”

In her opening remarks, Bedari Executive Director AnbreenAjaib said, “The parliament, the senate and the provincial assemblies have taken some effective steps to address Violence against women and girls. As we come closer to the 2018 elections, it is the right time to reflect upon the performance of these assemblies and to develop a future action plan.”

Calling for an end child marriage, Senator Seher Kamransaid that “If the law does not consider someone under the age of 18 mature enough to cast a vote, drive a car or even purchase a sim, they cannot be considered mature enough to bear the responsibilities of marriage.”

MNA Tahira Aurangzeb, in her keynote address said that behavior change and strong legal frame work is needed to protect women from violence. The population of Pakistan is one of the largest in the world and unemployment is very high. Skill-based education and entrepreneurship must be encouraged to promote women’s economic empowerment”.

Speaker Balochistan Assembly Rahila Hameed Khan said, “I condemn violence in all its forms and vow to go to any length to end it. Both the government and the civil society are doing great work to ensure women’s rights in Pakistan but it is time for us to join forces and in this regard this event is a great initiative.”

Oxfam studies show that marginalized women, including poor women and girls, are the most vulnerable to violence.1 in 3 women are estimated to directly experience violence; however it is everyone’s problem. The event marked an end to the 16 Days of Activism campaign which raises awareness about gender-based violence on local, national, and international levels. By speaking up to challenge the idea that domestic violence is a private issue, we can encourage victims to report and ensure that action is taken.

Published in The Balochistan Point on December 18,2017