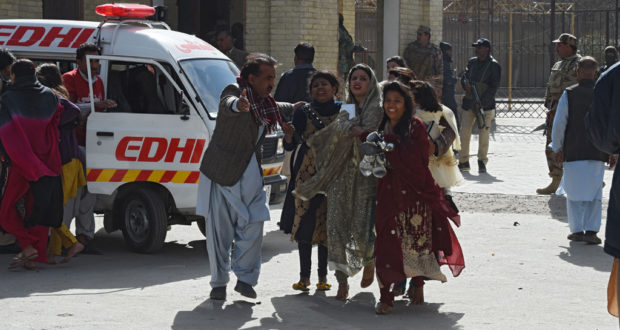 QUETTA: At least nine people, including a woman, were killed in a blast and 55 others injured at a Catholic church in Quetta’s Zarghoon Road on Sunday afternoon.

According to Quetta Deputy Commissioner Farukh Atiq, at least Nine people lost their lives and 55 others injured in the attack on the church.

Home Minister Balochistan Sarfaraz talking to the media said that two suicide attackers stormed the church when Sunday service was ongoing, one of them detonated his charge inside the church while the other was shot dead by security personnel at the entrance to the church.

The provincial police chief confirmed that two suicide bombers attacked the church when Sunday service was ongoing. “There were about 400 worshipers inside the church, but security forces’ timely response averted more casualties,” he added.

A heavy contingent of security forces arrived at the site of the explosion and cordoned it off while a state of emergency was declared at medical facilities of the city following the terrorist attack.

No terrorist group has claimed responsibility for the attack.

Published in The Balochistan Point on December 17, 2017