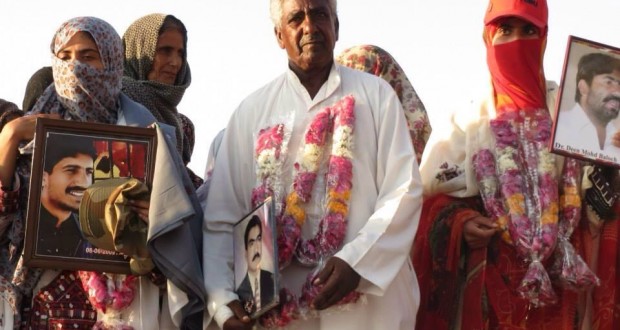 Participants of long march from Balochistan arrive in Rawalpindi

Islamabad: The participants of Baloch long march have arrived today in Rawalpindi and will march towards Islamabad tomorrow.

According to the details the participants of long march have arrived Rawalpindi and will march towards Islamabad. The long march is being led by Mama Qadeer Baloch, vice chairman of Voice for Baloch Missing Persons (VBMP).

The long march leader Mama Qadeer Baloch says that they intend to record their protest in front of United Nations office in Islamabad against human rights abuse, enforced disappearance and kill and dump of Baloch political activists.

The march had started from Quetta on October 27, 2013. The first phase, a 730 kilometer walk, ended in Karachi with a demonstration in front of the Press Club on November 23. The second phase began in mid-December.

Around 35 people are participating in the march and plan to continue their journey via Murree Road to Islamabad, which is around 30 kilometers from the UN office.

Published in The Balochistan Point on February 27, 2014

2014-02-27
admin
Previous: Letter: Neglected archaeological sites in Balochistan
Next: How Mama Qadeer made a history?