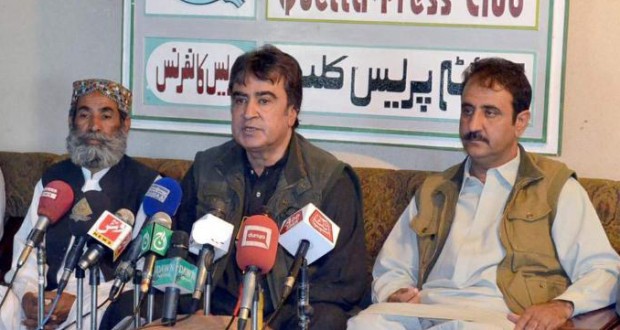 Problems Of Balochistan Will Be Solved If Establishment Changes Its Attitude: BNP

Quetta: If establishment of Pakistan changes its attitude then problem of not only Balochistan but also Pakistan will be solved, said Dr. Jehanzeb Jamaldini, Interim chief organizer of Balochistan National Party (BNP) in a press conference on Wednesday.

Lal Jan Baloch had retired from active politics two years ago and presently he was occupied with agriculture in Uthal, added Mr. Jamaldini

Security forces raided my home in Noshki and arrested my two nephews who are still missing, lamented Mr. Jamaldini.

BNP announced its protest schedule against the extra judicial arrest of its activists and leaders in the press conference.

From 2nd till 6th November protest demonstrations will be held in all districts of Balochistan. A Balochistan wide shutter down strike will be called on 7th November. If BNP leaders and activists are still not released then all national highways of Balochistan will be blocked for 3 hours daily from 10th November, as announced in the press conference.

Published in The Balochistan Point on October 30, 2014

2014-10-30
Editor
Previous: People In 29 Districts Of The Balochistan Are Living Below Poverty Line: Dr. Malik
Next: Pak-Iran Border Closed For Five Days Due To Ashura