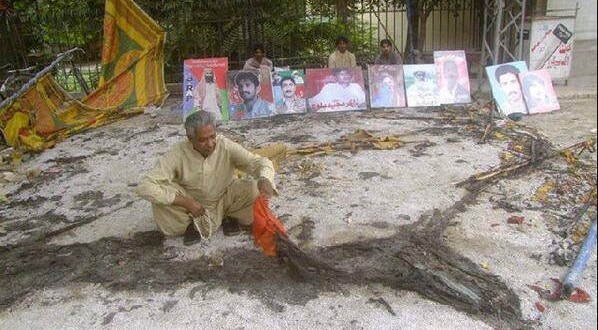 Quetta: The hunger strike camp set up outside Quetta Press Club by Voice for Baloch Missing Persons (VBMP) for recovery of missing persons was set on fire by unidentified people on night between Wednesday and Thursday.

Vice Chairman of VBMP Mama Abdul Qadir said  “I don’t know who have actually burnt the camp but we have been constantly receiving threats and warnings from government functionaries to dismantle the camp or face consequences,”

“I and my fellow protesters have received death threats but we will never end our peaceful protest for the recovery of our beloved ones who are being assaulted in torture cells,” Qadir Baloch said

Qadir Baloch  added that   chief justice of Supreme Court had taken notice of burning of strike camp. “We have hopes that CJ would do something for recovery of missing persons but so far his efforts are not yielding results,” he said

He appealed chief justice and other humanitarian organisations to take notice of brutalities allegedly committed by government functionaries against innocent Balochs in the province.

Published in The Balochistan Point on August 16,2013