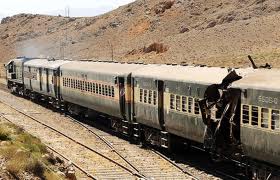 Quetta: Two people were killed and 24 wounded during an attack on the Rawalpindi-bound Jaffar Express on Friday, media reported.

The train was on the way to its destination from Quetta to Rawalpindi, when it was attacked with rockets in the Dozan area near Machh Town in Balochistan’s Bolan district.

The attackers were hiding in the mountains and first started firing and then fired at least three rockets at the train. Said Zubair Kurd ,  a local government official

Security forces, backed by a military helicopter, launched a search in an effort to trace and arrest the attackers, AP quoted railway official Kashif Khan as saying.

Published in The Balochistan Point on August 16, 2013

2013-08-16
admin
Previous: Protest camp for Baloch missing persons set on fire
Next: 2 ‘militants’ killed in shootout with FC in Bolan