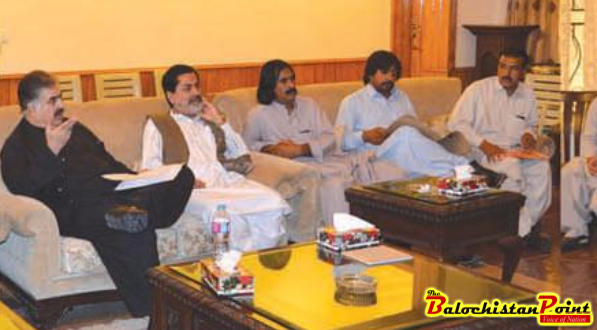 Provision of basic amenities to the far-flung areas is the top priority of the provincial government, says CM Balochistan

QUETTA: Chief Minister Balochistan, Nawab Sanaullah Khan Zehri has said that provision of basic amenities to the far-flung areas is the top priority of the provincial government. “To address the issues of remote areas of the province all authorities concerned, local administrations and representatives of local government should play their vital role with sincerity,” he stressed.

Chief Minister Balochistan was talking to Union Councils chairmen of District Khuzdar who called on him the other day.

Informing Chief Minister about the issues, UCs chairmen said that despite release of billions of rupees the development process in almost all UCs of Khuzdar is very slow. They said that owing to lack of power UC chairmen are facing problems while their specific areas are facing shortage of water schemes, schools and other basic facilities due to lack of funds. They also complained, facing hurdles in getting Computerized National Identity Cards.

At this, Chief Minister said that provincial government believes in development of all areas of the province particularly remote areas thus practical steps should be taken to address the issues of masses and ensure basic facilities. “Merit in recruitments and using quality material in all development schemes should be ensured,” he emphasized.

Nawaz Zehri said that government believes in empowering local bodies so that the issues of masses should be resolved at their doorsteps, adding government is giving more powers and funds to the local government.

He stressed for expediting the process of completion of development projects, provision of basic facilities to the people in remote areas and establishment of NADRA offices at tehsil level.