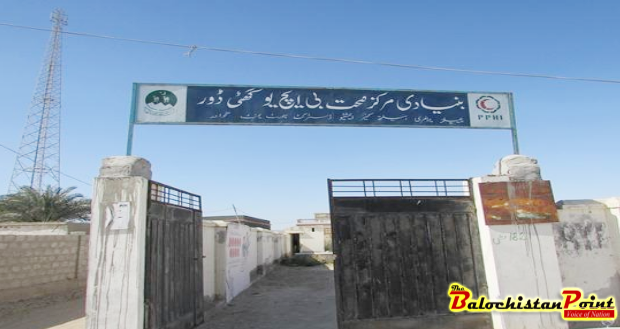 The Basic Health Unit at Gatti Dohr, Gwadar, Balochistan does not have a single doctor to serve 8,000 people across 4 nearby villages. The number of doctors is increasing every year in Balochistan but the doctor patient ratio is still off the WHO requirement of 10 doctors for every 10,000 citizens.

The current spending is less than 1 rupee for public health out of every ten rupees of the Balochistan budget. According to Government of Balochistan health data there are only two doctors for 10,000 people in Balochistan. Anyone who falls critically ill in places like Gatti Dohr has one option–to take the patient either to GDA Hospital or to the District Headquarter Hospital of Gwadar city.  But most of time both hospitals have limited resources and facilities so they refer patients to the closest hospitals 230 km away, in Turbat, district Kech or to 630 km away in Karachi, Sindh province.

Gatti Dohr is not some remote, poor village in an unknown district. It sits in Gwadar, the hub of Pakistan and China’s most ambitious project CPEC (China Pakistan Economic Corridor) which promises $51 billion investment.

On the other hand, the provincial capital of Quetta, where one out of every ten Balochistan is live, and the home to both medical schools, Bolan Medical College and Quetta Institute for Medical Sciences, only has six doctors for 10,000 people.

Here’s the bigger irony: Most patients with extremely critical conditions even in Quetta are recommended to hospitals 689 km away in Karachi. Out of every 10 hospitals in Balochistan, 5 are in Quetta. Out of every 10 hospital beds, 7 are in hospitals of Quetta and out of every ten doctors serving in Balochistan four serve in Quetta. Yet Quetta needs 533 more doctors to meet the WHO standard. The government will have to spend Rs. 266,500,000 to meet the required number of doctors.

In the last fifteen years, Balochistan government has only trained 1,860 doctors. That is to say, Balochistan has not produced enough number of doctors to meet her needs. With appalling health indicators, Balochistan has high maternal, newborn and under five mortality rates even in her capital Quetta.

On the other hand, children in Balochistan still suffer illness and death due to vaccine preventable diseases when only one child out of every ten in the province is fully immunized and seven children in ten are immunized in Quetta.

Behind inadequate number of doctors, unavailability of affordable and quality healthcare facilities lie thousands of stories of misery not only because inaccessible healthcare on regular basis but also in emergency cases. According to the SATP (South Asian Terrorism Portal) in the last ten years, 1237 people were injured in Quetta and 595 people were killed in suicide attacks.

In 2010 after 18th amendment, health policies were decentralized and power was given to provinces to invest in their own citizens. But the power was not fully used in Balochistan previously, as evidenced by the current healthcare crisis and low healthcare spending.

Mariyam Suleman  is a freelance journalist and assistant editor of The Balochistan Point.   Follow her on Twitter @MariyamSuleman