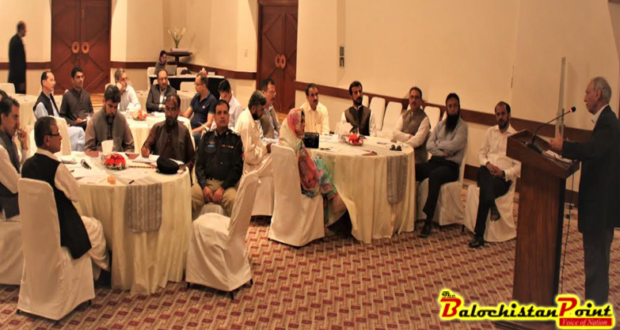 QUETTA: While chairing a planning workshop on ‘Operationalizing the Rule of Law Roadmap in Balochistan’, Secretary Home & Tribal Affairs, Mr Haider Ali Shikoh, on Thursday underscored the importance of strengthening the criminal justice system in the province. He urged the participants to propose sustainable solutions; so that archaic laws, outdated standards, and institutional shortcomings could be addressed on a permanent basis. He emphasized the need for modernizing state institutions to provide expeditious justice and services to citizens.

The workshop was convened by the Home Department, in partnership with the United Nations Office on Drugs and Crime (UNODC), to assist stakeholders in developing implementation strategies to address priority issues concerning key components of the criminal justice system.

UNODC is supporting the Government of Balochistan through its partnership with the Home Department under the ‘Rule of Law Programme’.  The key objective of this programme is to work across the rule of law sector for establishment and operationalization of core implementation, management, and monitoring mechanisms and to put in place support structures, so that reform momentum may be systematically sustained in the province.

The event was planned and organized as part of these joint efforts to fully operationalize the rule of law roadmap of Balochistan. Driven by the Delivery Unit based in the Home Department, the Roadmap process is technically guided by the ‘Technical Working Groups’ established in each department of the criminal justice system. These TWGs constituted the main audience of this workshop; which provided a collaborative platform to participants from Home, Police, Levies, Prosecution, Prisons, Reclamation, and Probation Departments for discussion and deliberation.

An overall purpose of holding this workshop was to assist participants in developing results-oriented, measurable, and time-bound workplans for their respective departments: so that their institutional priorities as identified in the rule of law roadmap for Balochistan are addressed in a structured manner.

Former IG Balochistan  Mr Tariq Khosa also spoke on the occasion. Referring to the ongoing challenge of lack of institutional capacity for ensuring law and order, Mr Khosa prompted the participants to consider chalking out effective responses regarding building of State capacities to deal with hostile forces,   including miscreants persisting in taking advantage of the ungoverned space in the province. Filling this space was crucial, he said, and only possible through implementation of the rule of law reforms. Mr    Khosa underlined the need for sustained technical support to be given to all stakeholders of the criminal justice sector. He noted the dire need for capacity building of core institutions such as the Police, Prosecution, etc. to enable the improved quality of investigation, and the prosecution and conviction of   criminals.

At the end of the exercise, working groups were formed to propose their respective action plans, focusing on key departmental priorities, including specific targets and indicators; along with time-bound activities, monitoring, data collection, and responsibilities. These plans are to be presented in the coming weeks to the Steering Committee of the Rule of Law Roadmap for approval, so that implementation may proceed smoothly.

Published in The Balochistan Point on June 3, 2019

2019-06-04
admin
Previous: BPSC is Illuminating the educated youth of the province
Next: Does Online Shopping Really Help Us Save Money?