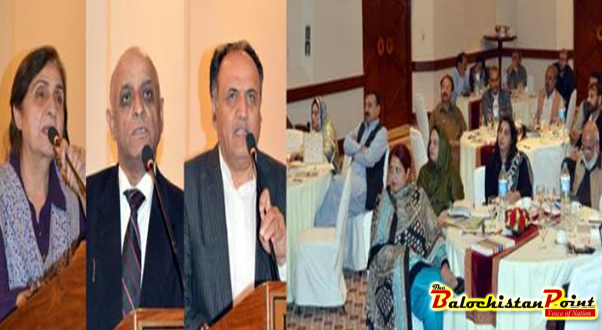 QUETTA:  A policy dialogue of Entrepreneurs and social activists on Women Economic Empowerment (WEE) was held at Quetta, organized by Women Development Department (WDD), Balochistan through technical assistance of UN WOMEN Balochistan. The participants of the event were Key government stakeholders, academia, UN representatives, civil society, business women, entrepreneurs, social activists & media.  The major objective of the dialogue was to share recommendations extracted during WEE Conference and seek recommendations on policy & package for business women and entrepreneurs, as well as create awareness through advocacy messages to target audiences, and allies for future action plan.

Mr. Siddique Mandokahil, Secretary WDD said that the international women day is celebrated every year with great enthusiasm, but this time its truly encouraging that provincial government has come up with something commendable and concrete, and that holding this successful dialogue held today, which is the second step of the previously held First women economic empowerment conference for Balochistan. He added that “Provincial government can never ignore the voices of women of Balochistan”. Women of Balochistan have low literacy rate and high maternal mortality, which are our key issues.  There are issues around malnutrition, social stigma/attitudes, low representation of women in public offices, lack of gender responsive infrastructure. Despite this the women of the province are participating and contributing to the economy, social and political life. Their efforts, however, need to be recognized and they should be supported further to take part in the development process. In today’s dialogue we seek your support to analyses the recommendations for women economic empowerment policy and strategy.

Chairperson Public Commission (PCS) Balochistan M. Kailash Nath Kohli while sharing his contributions with the forum said, that he has been already involved in provision of free of cost services for pro women legislation, secondly, he is currently technically facilitating the Women Development Department in amendments in the Inheritance law.  He ensured that qualified lot of women from PCS are joining different government sectors and private sector as well.

Ms. Rehana Khilji Head UN Women Sub Office Balochistan, while sharing the detailed outcomes of WEE conference, emphasized on leaving no one behind in the sustainable development process. At the same time she stressed on the importance of addressing the root causes on inequality, ensuring enabling environment for women in the workforce,  registration of informal workers, legislative & institutional framework to increase women’s economic opportunities by supporting women to secure decent work. She seconded the idea of skill development and endowment fund proposed as integral part of the future government policies.

Miss Ambreen Gul shared the recommendations of the Women Conference with the participants that included legisilative, policy and operational aspects.

Ms. Sana Durrani , Member NCSW , facilitated the session on policy and strategy recommendations for women economic empowerment package for Balochistan. In this discussion session issues were prioritized, priority and emerging areas on WEE were identified , strategies were proposed along with resource mobilization and implementation aspects. The inter-sectoral convergence at all levels was recommended in order to economically empower the women of the province and to put them in better position to participate and benefit from CPEC and beyond.

Ms. Roshan Kurshid Barocha, the chief guest highly commended the role and initiatives of Women Development Department , under the leadership of Secretary Mr. Siddique Mandokhail.  She said, that its high time for inter sectoral convergence so that the government, private sector and civil society may come together on same page on women economic empowerment agenda. She stressed on capacity building of entrepreneurs in the emerging sectors. She added that “concrete steps should be taken to incorporate the elderly, women with disability, widows and vulnerable women, part of the policies owned by the government.

The event ended by vote of thanks from Secretary Women Development Department Mr. Siddiq Mandokhail, followed by shield distribution , recognizing the efforts of key stakeholders for women economic empowerment.

Published in The Balochistan Point on March 19, 2018