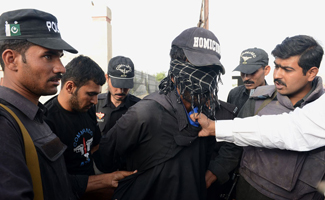 According to the sources, two security men were also injured in exchange of fire with militants during a crackdown against banned religious organizations. Police, Anti-Terrorist Force and Frontier Constabulary jointly conducted a raid near Magsi Stop near the Eastern bypass early Tuesday, on a tip off about presence of members of a banned outfit in the area.

Shootout took place between the troops and terrorists who used heavy arms and ammunition, including rockets and grenades during the battle which continued almost the whole night, said sources.

As a result of the operation, four terrorists were killed while two security officials sustained injuries.

Published In the Balochistan Point on July 30, 2013

2013-07-30
admin
Previous: I Hope Intelligence Agencies Will Work with Us: Chief Minister Dr. Malik Baloch
Next: The truth of threatening a Baloch journalist