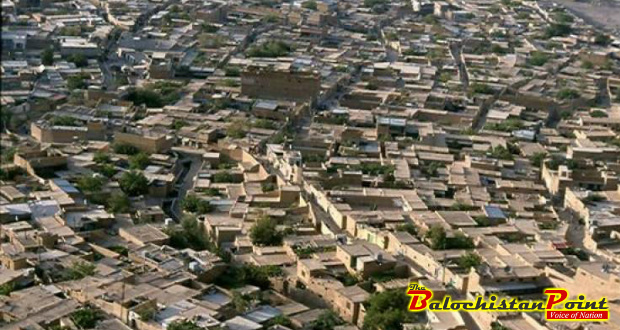 Quetta, the capital city of Balochistan, was established as a military garrison by British raj. It was planned to accommodate 100,000 people. Today, almost 140 years after its establishment, Quetta is home to approximately 3 million people. Accommodating 30 times more people than its capacity has taken its toll on the city and a lot of municipal problems have surfaced. Compounding those problems is the gross mismanagement of successive provincial governments and incompetent bureaucrats.

Quetta is not only the capital city but also the only metropolitan city of Balochistan. People from all 31 districts of the province live in Quetta because it’s the only city where living standards are comparatively better as compared to other districts. This means that problems in Quetta affect the people of Balochistan as a whole.

The capital of Balochistan faces a plethora of problems, the most serious of which is water shortage. Due to a lack of planning and unchecked increases in tube wells, the water table in Quetta has fallen. Water and Sanitation Authority (WASA) – the body which supplies water to the city – struggles to supply water to even a small portion of the city. A majority of Quetta’s residents have no option but to avail the services of the water tanker mafia to get water for their daily usage. According to experts, problems of water shortage will exacerbate in the future. Experts maintain that if no concrete action is taken then the people of Quetta might even be compelled to migrate due to water scarcity. Ever since the time of the government of Pervez Musharraf, funds have been allocated for increasing the water supply of Quetta. Unfortunately, a major chunk of those funds have ended up in the pockets of corrupt ministers and bureaucrats and the problem has remained unresolved.

Poorly managed traffic system is another problem in Quetta city. There is absolutely no system of traffic in the city. There is not a single traffic signal in the entire city and traffic jams are a common occurrence. The existing network of roads in Quetta can’t accommodate the increasing load of vehicles and there is no traffic engineering and planning department in the city. In the near future, it would be a herculean task for common residents of Quetta to even drive a few kilometers on the roads of Quetta. Adding to the problems is the construction of commercial plazas and hospitals in busy areas in complete violation of the building code and town planning rules. In short, traffic in Quetta city is a mess which will become messier in the next few years due to the apathy of those in charge.

Moreover, law and order is also a grave problem in Quetta city. Target killing of common people and policemen is a common part of life in the city. Incidents of robbery and snatching on gun point are increasing rapidly in the outskirts of the city. In response to these problems, the provincial government only performs lip service and Dr. Malik makes absurd claims that the security situation has improved. A recent childish step taken by the provincial government to control the security situation is to install barriers on all the major roads of the city. This is just one example that reflects the non-serious attitude of those calling shots in Quetta city.

There was a time when Quetta was called “Little Paris” due to its cleanliness, pleasant weather and scenic beauty. Today, thanks to gross mismanagement and unchecked urbanization and settlement of Afghan immigrants, Quetta is one of the most polluted cities of Pakistan. Heaps of garbage can be found in every nook and corner of the city. There is lack of a proper sanitation system in the city. Whenever there is a mild outpour of rain, the roads of Quetta start smelling like drains. Funds are allocated for cleaning the city and improvement of the sanitation system but what happens to those funds? No prizes for guessing.

Now, the obvious question that arises is who is responsible for turning Quetta city into a mess? The prime responsibility for this lies on the shoulders of Chief Minister Dr. Malik Baloch because he is the chief executive and every government officer ultimately reports to him. Apart from that, Dr. Malik Baloch and his allies have given minimum powers to the newly elected local governments and rendered them useless in solving the basic issues of Quetta. So, along with several other avenues, plight of Quetta city is yet another proud achievement of Dr. Malik and company.

The parliamentarians of the city, too, share the blame for the condition Quetta is in today. The city elects 6 members of provincial assembly and 2 members of national assembly. In addition to that, almost all the members of Balochistan assembly, Senators and MNAs from Balochistan, live in Quetta. Despite that, their contribution towards the resolution of the city’s problems is almost equal to zero. These so-called representatives of the people belong to the privileged class and live in a reasonable degree of comfort and, hence, are not bothered about the problems faced by the common people of Quetta.

When it comes to solving the problems of Quetta in the near future, there is no light at the end of the tunnel. The Chief Minister and his entourage live in peace and comfort of the red zone of Quetta. Apart from rhetoric, they have no concern whatsoever for the problems of Quetta citizens. This newly emerging elite class of Quetta is a major problem that the people of Balochistan need to get rid of, if they want to improve their standard of living.

Republished in The Balochistan Point on July 26, 2015