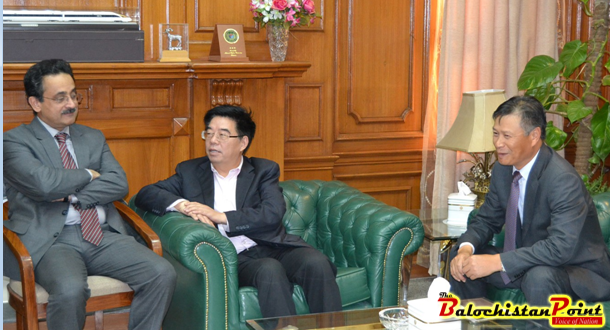 Quetta: In order to materialize the vision of Chief Minister Balochistan, Nawab Sanaullah Khan Zehri, the Quetta Mass Transit Train System’s Phase- I would be completed in 2019. Work on this project is in full swing and after its completion it would provide economical and comfortable traveling facility to the masses.

During the meeting the designing and feasibility report of proposed project was thoroughly reviewed by Provincial Authorities and officials of Chinese Companies.

The meeting was briefed that in the first phase of Mass Transit Train System, the project would cost $214 million, consisted of 48.5- km long from Kuchlak to Spezant, in which 5 to 10 railway stations, 3 overhead bridges and 1 tunnel would be constructed.

First phase would be completed by 2019 and according to an estimation 25 to 30 thousand people would enjoy the cheap and comfortable traveling facility from this project on daily basis.
In the second phase of the project more stations, business centers would be constructed and the people would be given more facilities.

On the part of Chinese delegation, the meeting was informed that Chinese government is taking keen interest in this project as this project is among their priorities.

It may be mentioned here that Chief Minister Balochistan during his last visit to China had recommended Chinese authorities for making this project a part of CPEC.

Under the recommendation of Chief Minister, the approval of making this project a part of CPEC would be given in the meeting of Joint Cooperation Committee (JCC) on CPEC which is going to meet in Beijing on November 29th, this year.

On the part of Chief Secretary Balochistan gave approval for formulating Joint Working Group between Provincial Authorities and Chinese companies to expedite the pace of work on the project and finalizing the technical and financial affair.

It was decided that Joint Working Group would remain contact regularly via video conferencing while its first meeting would be held next week in Beijing.

On the occasion, Additional Chief Secretary Daud Barech said that Green Bus Project which is included in the Annual Development Programs would be integrated with Mass Transit System at this the people would be benefited a lot from train system.

Published in The Balochistan Point on November 2, 2016

2016-11-02
admin
Previous: CPEC: A Baloch perspective
Next: End Impunity for Crimes against Journalists in Pakistan