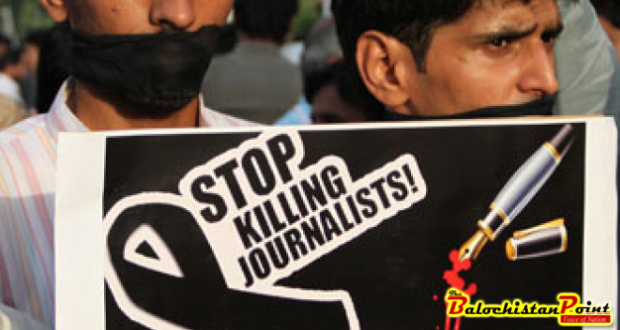 End Impunity for Crimes against Journalists in Pakistan

Islamabad: The media in Pakistan strive to play role for transparency and accountability in Pakistan but faces many heinous factors. According to International Federation of Journalists (IFJ), 115 journalists have been killed in Pakistan since 1990, leaving Pakistan among the most challenging environments to perform their duties. Every year, Mishal Pakistan remembers the lost lives of journalists in the line of duty through the annual journalism excellence recognition. The AGAHI Awards honors the sacrifices and contributions of the journalists in Pakistan on International Day to End Impunity for Crimes Against Journalists, observed every year on 2nd November.

The Freedom of the Press Report 2016 of the Freedom House highlights that while the rate of media workers’ killings has declined somewhat in recent years, the number and intensity of threats directed at journalists from a variety of actors, including state and non-state actors, especially the militant groups, remained high in 2015. Impunity remained the norm for crimes against journalists.

Among the key developments in Pakistan, the broadcast regulator, PEMRA, issued new guidelines that limited discussion of security operations and other sensitive topics. Also in November 2015, reporter Zaman Mehsud of the Daily Ummat and Daily Nai Baat was shot and killed in Khyber Pakhtunkhwa Province. The Taliban claimed responsibility for the attack. The report also highlights that, journalists with Pakistan’s largest private television network, Geo TV, and its affiliated outlets remained frequent targets of violence and intimidation.

Mishal Pakistan has been actively engaged in media development for the last thirteen years. To improve the narrative building around human security, competitiveness and economic development, this year Mishal Pakistan and Agahi have special categories in AGAHI Awards for journalists reporting on more than 30 indicators. Mishal has the credit of training more than 5000 journalists across various verticals of journalism in socio-economic and political spheres.

Established in 2003, Mishal has been engaged with some of the most dynamic organizations, including media enterprises and global development agencies helping them develop their communication strategies and solutions for better understanding and creating synergies with their concerned stakeholders. Mishal is the country partner institute of the Center for Global Competitiveness and Benchmarking Network of the World Economic Forum.

Published in The Balochistan Point on November 2, 206

2016-11-02
admin
Previous: Quetta Mass Transit Train System’s Phase- I would be completed in 2019
Next: Demand for teachers at Saindak Primary School