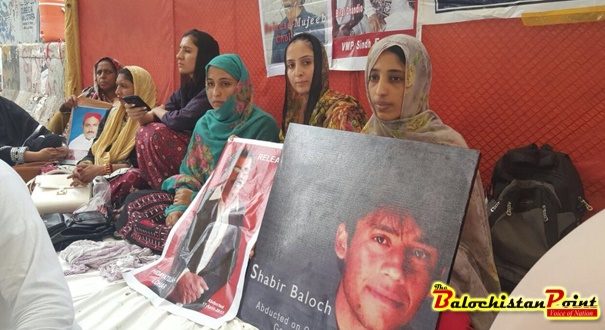 Quetta: Human rights activists and family members of Baloch missing persons have been protesting for the safe release of their loved ones outside the press club Quetta.

On Thursday along with family members of Baloch missing persons, a huge number of human rights activists, members of the civil society and lawyers carried out a protest outside the Press Club demanding safe release of forcefully abducted Baloch political activists, students’ leaders and people from different walks of life.

The campaigners, mainly, women, and children have been on hunger strike for almost a week. The Voice for Baloch Missing Persons (VBMP) is leading the campaign for more than ten years, under the leadership of chairman of VBMP Nasrullah Baloch and Vice Chairman Mama Qadeer Baloch.

Lashkari Raisani, a Baloch nationalist and leader of Balochistan National Party, in his recent visit to the camp questioned higher authorities and seconded the campaigners for their legal rights for demanding fair trial for the enforced disappeared Baloch under Pakistan’s constitution.

Published in The Balochistan Point on November 17, 2018