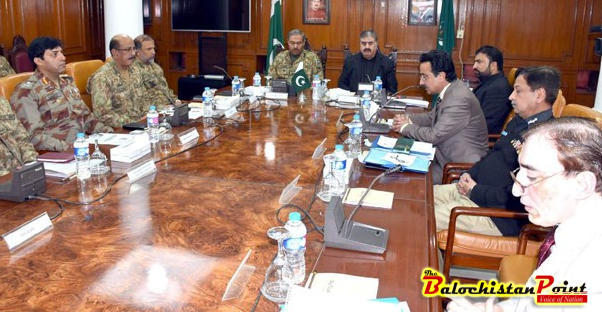 QUETTA: The meeting of Provincial Apex Committee, presided over by Chief Minister Balochistan Nawab Sanaullah Khan Zehri on Thursday thoroughly reviewed law and order and security situation of the province.

Police and other law enforcement agencies officials briefed the Apex Committee in detail about the law and order situation in Balochistan.

The Apex Committee discussed existing situation of security in Balochistan and reservations in detail in the context of recent terrorist incidents in Quetta and other parts of the country.

The apex committee expressed the resolve that the terrorists would not be allowed to resurface and those becoming threat for security would be dealt with iron hands. It was decided that in order to implement National Action Plan in accordance with its true spirit an effective strategy should be adopted to ensure useful coordination among all concerned security agencies.

The meeting paid rich tribute and homage to the police officers, security personnel and other people who embraced martyrdom in the incidents of terrorism.

Published in The Balochistan Point on February 17, 2017

2017-02-17
admin
Previous: Increase in agriculture production is the first priority: Secretary Agriculture  Balochistan
Next: Letter: Illiteracy is a major issue