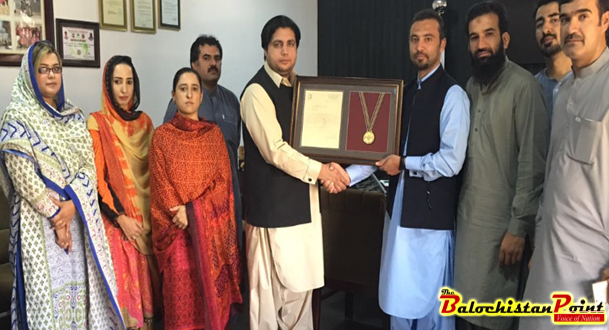 Quetta: Pakistan Red Crescent Balochistan (PRC) graced Muhammad Ibrahim Khan with an honorary shield for his extraordinary performance as ERT (Emergency Response Team) member responding every mishap in the city. The practice is linked to the tradition of PRC to appreciate & encourage the volunteers. This is one of the chain activities of International Youth Day (celebrated on 12th August every year) Celebrations.

Ibrahim has been associated the world’s largest humanitarian network, Red Crescent, Balochistan Branch as a volunteer since 2009.

In 2009 a strong earthquake hit his village, Khanozai, leaving the area with debris all around. Therefore,  the first time he saw the Red Crescent Team wearing red jackets. They were carrying out rescuing operations and providing people withlogistic and medical help and he also started helping them in conducting life-saving activities.

He narrates his story, “I came to Quetta and attended training of Youth and Volunteer Program of Pakistan Red Crescent Society Balochistan Branch. Meanwhile, security instability was on rise in the city and two of my best friends were killed the same year. What stimulated me to join the Red Crescent was that one day one of my friends was shot before my eyes and I let him die as I had no idea of first aid. The least I could do then was to scream and beg for help. This sad incident proved to a blessing in disguise as I started attending First Aid trainings regularly. After one laborious year I finally was able to provide any kind of first aid on my own. In 2011, two consecutive suicide bomb attacks occurred on residence of the DIG FC (Frontier Corps) and I along with Red Crescent team reached on the spot to rescue people. It was my first practical real life experience. Dr. Imran Khan (Provincial Program Officer PRCS Balochistan) and other volunteers were providing the First Aid to the injured but I was terrified to see human flash burnt and scattered all over the place. The trauma was so intense that I couldn’t move so I didn’t help anyone. Afterwards however in order to overcome terror I started visiting hospitals so that I get an insight and get rid of fear and strengthen my nerves.

Two month later there was again terrorist attack took place and I reached the spot. I found a police man fainted on the ground; I checked his nerves as per learnt method from PRCS and found him dead. Another injured was trembling with pain because the bullet had pierced his heart. I tried to give him First Aid but again I failed to execute what I had long practiced and terror subdued me.

I discussed my condition with Dr. Imran who after some counseling helped me continue with my passion. Since then I have provided First Aid in almost 30 terrorist attacks and around 50 other killings. I have finally conquered my emotions and tears.

But June 15, 2013 shook my entire being and made my heart ache. A bus carrying students from the BahadurKhan Women University was attacked with an explosive device. There were lot of dead bodies and injured girls on the ground. I saw one heart beating in the water and a girl’s hair along with her scalp. While conducting rescue activities my tears were continuously falling down. I found a girl that was critically burnt and she was crying. I covered her with cloth and washed her face and hands to provide some relief to her burnt tissues. When I came out with her I was really scared of her male family members keeping in view the tribal norms but on the contrary her father came and pated on my head with affection and prayed for me. While we were carrying out rescue operation there, militants attacked BMC (Bolan Medical College). We volunteers along with Dr. Imran reached BMC and heavy cross firing started. We headed towards upper floor and found dead bodies of a nurse and 2 FC personals besides a suicide attacker. I asked a man standing nearby to help me to transport the nurse to the ambulance but he was hesitant because her dress was completely burnt. Militants had occupied the building and FC personnel reached by the time and launched an operation.

It was dark, when I came down my clothes were covered with blood and dust and my foot was hurt. But the reception given by Senior Army officials FC personnel delighted my heart and made me forget my pain, fatigue and wounds.

That day, for a while a thought came in my mind that I would ever be able to see my family and friends again but there was no regret rather I was proud of being able to serve humanity. Various times I heard people we helped called us ‘Angles in Red Jackets’.

Published in The Balochistan Point on August 31, 2016