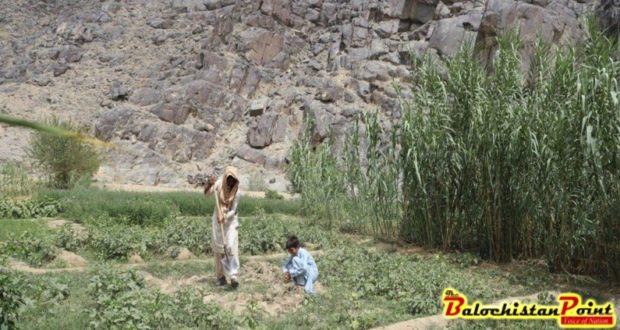 CHAGHI:  Afghan refugees in the remote district of Chagai putting in efforts to transform the rocks and desert into the green farms – contributing to the local economy and a better environment.

Posti Refugee village is a self-sufficient organic farm in the barren hills of a rocky desert area in District Chaghi, in the North West corner of Balochistan. This is a remote area that is about 65 kms from Dalbandin. The products of the village are well known in the local markets. Its vegetables, especially luffa, have become very popular in Dalbandin city.

“This was a complete desert many years ago but we turned the area into green land,” said Gul Khan, who left Afghanistan due to war and came to Posti located at the border with Helmand province in Afghanistan.

Khan was a young man when he moved into Pakistan. He said it was not easy to build these farms. When they first arrived, he recalled, they used to go to far-flung areas and work as daily age laborers and after some time they were able to build mud houses, although bringing material for construction was another hard task because there was no road in the middle of the mountains.

“Everybody used their own resources to build these farms. People who could not afford tractors used hand trolleys and even their shirts,” Khan recalled, adding that the journey was far from smooth, with floods being the main threat that used to destroy everything, leaving them to start again from zero.

Khan said now their fields produce wheat, tomato, chili, cucumber, and other green vegetables, which are supplied to Posti and Dalbandin markets.

“We are the only source to provide fresh vegetables in the area,” he said proudly, however adding that now, unfortunately, the underground sources of water are gradually decreasing, resulting in low harvests.

To educate these refugees in how to grow plants with limited water resources, UNHCR, with the technical support of FAO, is piloting an agricultural project in Posti refugee village.

The initiative includes capacity-building sessions on home-based agriculture, the provision of tool kits and other forms of technical support on sowing and harvesting.

“This project will provide effective assistance to this community, which is an inspiring example of sustainable self-sufficiency – ensuring good quality food for their families as well as earning an income from that production,” said Ruvendrini Menikdiwela, UNHCR’s Representative in Pakistan.

Ms. Menikdiwela said investing in agriculture is an effective strategy to build livelihoods and to create benefits for both refugees and host communities.

Published in The Balochistan Point on December 31, 2018

2019-01-01
admin
Previous: A New Year’s resolution to remember
Next: Letter: Lack of science and mathematics teachers in Kalat