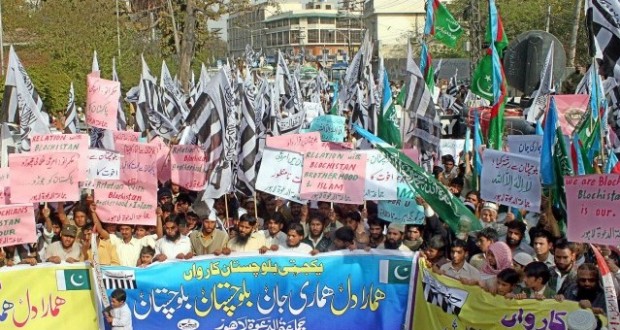 Borderlands of many post-colonial states most frequently pay the price for protecting the centre. They are prima facie kept intentionally for such purposes when required. Nonetheless factual raison d’être for this objective is based more paradoxically on constructing discursively the existence of state as a natural phenomenon. In nitty-gritty while fathoming historically this is not the case instead we are compelled to be propped up by constructivism. The same transpires with us in Pakistan where its existence is directly linked with natural happenings implying with enduring scrambles over the centuries ultimately emerged in the guise of Pakistan in 1947 and some specific provinces are on the vanguard for its existence not all en masse. However the former claim does not encompass historical and logical basis.

As aforementioned, Balochistan’s areas contiguously linking with Afghanistan have gone through the same encounter since 1980s particularly and over several decades in general. Each time inhabitants of this chunk of land have fought periodically for Pakistan in the name of Jihad. Social structure changed, agriculture deteriorated excessively, and radicalization burgeoned exponentially due to their both active and passive support rendered to the country and its mercenaries. In the same realm states never miss an opportunity to exploit masses for existence at any cost. Different jargons are propounded enthusiastically, be they religion, nationalism, and patriotism. Interestingly in concerted areas religion was used candidly juxtaposing Pakistan, Islam, and their defense naturally obligatory. But with the passage of time this explanation exposed to people and ulterior reasons were other and they realized what and how they are exploited.

Markedly, if certain sacrifices would be copious for a specific period of time, this would please us, rather still we are scapegoats for this to sustain. Whether we talk in terms of religiosity or radicalization they are soaring day by day unfavorably among the people. The nature of the conflict over border especially in Balochistan has changed entirely however the dynamics are similar what we experienced in 1980s and 1990s. Resultantly, though natives may know and they actually are much familiar with murky consequences of the drama, but again various orations entice their gustoes and make natural radical outlooks for sacrifices.

Recently in Baloch part of the province, one of the militant organizations threatened women to relinquish modern education. They were of the view that such practices are identical to un-Islamic traditions and only spread denudation within society. Critically evaluating this tragedy such happenings are exclusively aimed at making society backward and subservient to radicalized notions. Definitely if education expands abundantly what actually does not differ sufficiently, society will increase its trend towards medieval norms. The emergence of these threats has dismal impacts among the dynamic people of Balochistan in all parts of the province. On the other hand Madrasshas are increasingly promoting radical messages amongst people provoking religiously motivated ideas. Financial and other types of contribution to militant organizations occur basically owing to addresses clerics make by proselytizing opinion accordingly. This hegemonic power of Mullahs compels public to accommodate militant elements.

All those regions which are porous to Afghanistan have been continuously fighting for the safety of Pakistan at the expense of their property, social norms, and traditions. Alternatively in swap they have got nothing more than desperation and misnomers among intellectuals. Despite myriad sacrifices for Pakistan they have made, in return they only deserve to be called traditional, tribal, and backwards. However in actual terms many times fighting with Pakistan’s adversaries so called educated elite did not do much what the same traditional delivered. Even now celebrations for 14 August are embellished more eagerly in contrast with other province by some privileged strata of society identifying more with state tags rather than other identities. This divulges their patriotic behavior what is usually denied in national discourses. Misfortunately in return agriculture due to load shedding, education because of no educational institutions, and politics because of radical elements have destroyed social fabric completely as quid-pro-quo for patriotic fervor.

As I mentioned before about Baluchistan which has probably not historically succumbed to radical ideologies with the exception since few decades in religious narrative what is being promulgated now with brute-cum-fear. The people in the province are supposed to refuse accommodation to all sorts of subversive activities taken on the name of religion. Contemporarily previous elections in 2013 showed people’s direction more vividly by electing nationalist parties vis-à-vis other religious outfits. It primarily shows clearly that masses in Balochistan do not buttress militancy and radicalization rather these projects are imposed over them through distinct strategies.

Conversely, the state must recognize eloquently what public demands in Balochistan. It is necessarily incumbent on state not to impose whatever it considers essential for its security and inconsistent with citizens’ minds and traditions. And most indispensable for people is to forego support to militant organizations and abandon them actively and passively even though hegemonic forces try to do. They must not be accommodated in society so that configuration of dove and hawk remain clear. Both religiosity and radicalization are increasing at the same time with parallel ratio and it is the responsibility of masses to disown clerical manipulations.

The writer is M.Phil scholar at Quaid-i-Azam University Islamabad.

Published in The Balochistan Point on August 14, 2014.

2014-08-14
Editor
Previous: Real “Azadi” March is happening in Balochistan – Nawaz Sharif
Next: Shutter Down Observed in Major Cities of Balochistan