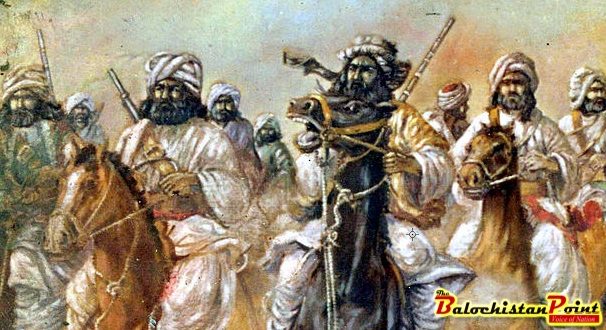 Revisiting History: War between the Rind and Lashari tribes of Balochistan

By: Maham Yaseen Baloch
Pakistan’s rich culture is a mixture of many ethnic groups, each with their own uniqueness scattered in the vastness of our land and one of these is The Baluchi fascinating culture . The rich culture is famous for its rich traditions and historical events and one of these is the historical war between Rind and Lashari tribes of balochistan which took place in 15th century. The war holds Immense importance in our history as it is studied even today.The heroes of the war were Chakar rind and Sardar Guahram Khan.
Meer Chakar Rind, Chakar the great was born in 1468 in Aashaal Kolwa, Kech, Balochistan. He was a Baloch chieftain in the 15 century. He aided Mughal emperor Humayun in his reconquest of the subcontinent. He is considered a folk hero of the Baloch people. He became the leader of Rind tribe at the age  of 18 when his father (Mir Shahak Khan) passed away. He lived in Sibi, in approximately 1500 a Great Baluch Kingdom was established under Sardar Meer Chakar’s rule which however could not last longer when the civil war burst out between the two tribes.

Meer Guahram Khan Lashari was also a Balch cheiftan in the 15th century. He played an important role in the history of Baloch.

The Rind and Lashar were two tribes living in Balochistan those days. Rind clan was headed by Chakar and the Lashari clan by Meer Guahram Lashari. The Rind tribe was a prosperous and huge tribe but later destroyed owing to a civil war. These both tribes went to war for 27 years which resulted in the death of thousands of people. It all started with a horse riding competition. The Rinds won the competition and then the Lasharis on their way killed and looted the calves of Guarhar Jatui( a women from Rind tribe). Chakar then called the Lasharis to return the calves but they denied and this resulted to a devastating war which left many children orphans and women widows. The two tribes fought 25 battles, in 10 battles the Lasharis defeated Chakar and the other 15 battles were won by the Rinds. But it’s believed that Gauhar was just a little reason, the main component of the war was the land,

The Rinds lived in a much prosperous land , the  Lasharis then oughted to annex the land from Rinds but all in vain. In 1518 Mir Chakar along his tribe defeated the Lasharis and then left Balochistan to settle in the Punjab region. The war and dauntlessness of the two tribe leaders continues to be a part of the Baloch’s history.
Published in The Balochistan Point on May 11, 2018
Comments

2018-05-11
Editor
Previous: Maternal and Child healthcare: A privilege or right?
Next: Examining child labour in Balochistan