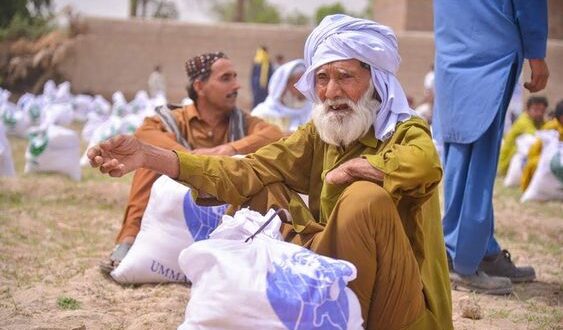 COVID-19 has become a great challenge worldwide. It is affecting people in every walk of life, with different impacts in every country. It is also affecting people in Pakistan financially and it will most likely increase poverty. The COVID-19 pandemic in Pakistan was confirmed on 26 February 2020. Till today thousands of cases have been tested positive and registered in entire country.  Numerous steps are underway to control COVID-19. With the limited resources, apart from health facilitated measures Pakistan has also taken actions for awareness campaign and lockdown to control the spread of virus.

It goes without saying that due to the long lockdown millions of Pakistanis were compelled to strive. While lockdown was imposed on April 2nd in Balochistan, and it is still continued till today on the federal direction.

So as to assist people the government of Pakistan launched Ehsaas Emergency Cash program to financially support vulnerable people during the lockdown.  Ehsaas Emergency Cash program was launched by the Prime Minister on April 1, 2020 in the context to cope with the economic hardship.    Also a large number of the beneficiaries in Balochistan included female. Government of Balochistan also announced to provide food commodities to 1.20 million households in Balochistan and in case of prolonged lockdown government could facilitate to 2 million households.

In the current situation social activists, philanthropists and charity organizations are actively playing role to help needy people with food commodities and cash amounts. However, there is great need to handover the food and aid to the right people since in such situation hundreds of fake and so called organizations become active and exploit the right of deserving people.

Some so called organizations collect aid and then misuse them for social disorganization and in terrorism activities. In order to control the misuse of charity or aid the philanthropists and the receiving hands should properly be monitored. For long time there has been no proper check and balance of on humanitarian activities, giver and receivers of the charity.

So as to deliver the charity, food commodities or cash should be carried following the set laws of the country. The commodities be handed over to the trustworthy and registered organizations or trust distributed among the deserving people.  The cash amounts should be paid through banks. This will help the individuals and other organizations to convey the Right to the Right people.  Since it is not only our religious, responsibility but also social, and ethical duty.

No doubt the misuse of public wealth and charity increase sense of deprivation in society which affects mental health. The HARD Balochistan, Awaz Foundation Pakistan, Center for Development services and Ujala Network have also highlighted the issues related to mental health due to fear of lockdowns and coronaviruses.

The fear of lockdowns and coronaviruses, changes in daily routine / daily routines have radically changed attitudes, irritability, stress and social issues. In this situation, women are being subjected to all kinds of violence. According to survey reports, the first quarter of this year saw a 200% increase in violence against women and children due to the corona virus lockdown in Pakistan. 90% of the incidents of violence against women and children took place in different cities and villages.

In the first quarter of this year, homicide cases increased by 142.1%, while 164 kidnappings were reported, apart from the with incidents of sexual violence and suicides. Unemployment and stress will increase in the country. As a result, crime and suicide are on the rise, along with suicides.

Published in The Balochistan Point on August 6, 2020

2020-08-06
admin
Previous: Ehsaas Emergency Cash program requires redesigning in upcoming phase
Next: How can Balochistan prosper if its poor children are out-of-school and uneducated?