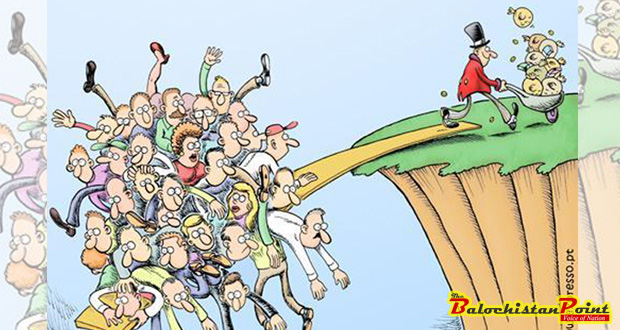 Rising Wealth and Poverty in Pakistan

According to the World Ultra Wealth Report, Pakistan is home to 415 super-rich people and their assets are worth approximately $50bn. Last year, there were 310 Pakistanis in the category with assets worth $40bn. Increase in number of wealthy people in Pakistan proves that affluent people are doing really well.

Apparently all this sounds good but the ratio of the have-nots has also gone up considerably. Poor people are offering their body parts for sale to get food for their families. Arranging two meals a day for a family is becoming a Herculean task for the common Man in Land of Pure.

Neither any proper data nor information about the sources of the income of the super-rich is available. It cannot be claimed, under any circumstances, that all that money has been earned through just and legal means. In Pakistan there are several ways to earn money and various means to evade taxes. Corrupt protect one another, be they among the politicians, generals, bureaucrats or religious leaders. All are united to safeguard the interests of one another besides increasing their strength. Rests of the population is perhaps born to serve these ‘Super human.’

Unlimited and unchecked wealth has made these ‘Super humans’ resort to murdering others for the sake of fun. One such example is the murder of a youth, Shahzeb, at the hands of the son of a big landlord. Even the superior judiciary seemed helpless when an ‘agreement’ involving millions of rupees was reached between the heirs of the victim and the ‘powerful’ accused. Perhaps a message was conveyed to the common man – Do not dare to ever challenge the authority of the powerful. Shahzeb case reiterated the belief that in Pakistan wealth could cover up all misdeeds.

After 68 years, it is a point to ponder whether our elders sacrificed so much to achieve a separate country where the rich become richer and the poor become poorer. A number of allegations are leveled against colonial rule, but there were no such injustices back then as one can see in present day Pakistan.