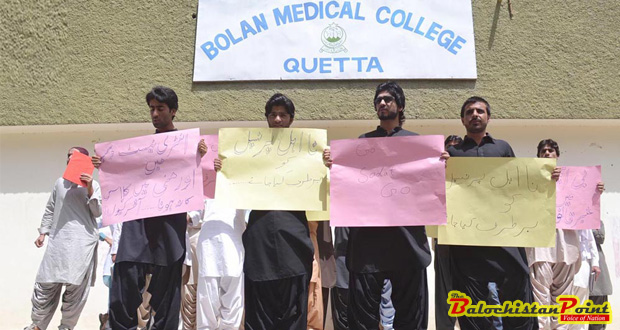 Quetta – Students of Bolan Medical College (BMC) have demanded the dismissal of their principal, on Sunday.

Students of BMC protested against the attitude of their principal and also chanted slogans against mismanagement and incompetence of the principal.

According to protestors, Entry test of students in BMC was conducted in December last year but classes of the new batch have not commenced so far. This is resulting in wasting precious time of the stunts, claimed the protestors.

Principal of BMC is on leave most of the time and He is not interested in solving the problems of college, alleged the protestors.

“BMC principal is involved in illegal admission of students who are otherwise not eligible for admission,” lamented the protesting students.

Protestors under the auspices of Baloch Students Action Committee met with Health Secretary, government of Balochistan, and apprised him about the problems in BMC.

Protesting students warned that if principal of BMC is not sacked within two weeks then BMC would be locked down by the students.

BMC is the only functional medical institute in public sector in Balochistan and it’s facing gross mismanagement issues.