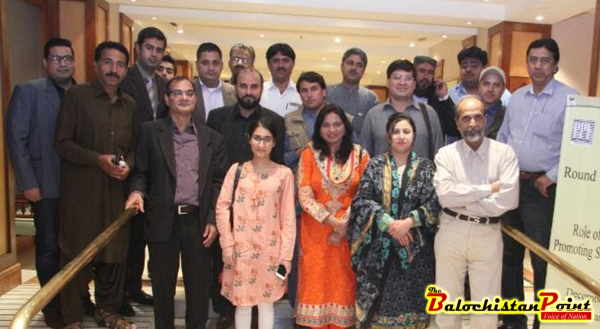 Karachi: Press clubs’ representatives from across Pakistan agreed that the rush for breaking news combined with the unprofessional attitude of editors, newsroom personnel and media houses leave journalists working in the field vulnerable and at risk.

This was the consensus at the ‘National Consultative Dialogue on the Safety of Journalists,’ organized by the Pakistan Press Foundation (PPF) with the support of Open Society Institute (OSI) at a local hotel in Karachi on Thursday.

Participants also narrated stories of attacks on their respective press clubs, and the threats faced by their members.
It was agreed that the ‘breaking news’ phenomenon found in electronic media, combined with non-professional attitude of newsroom editors as well as journalists puts journalists at the greatest risk.

Lack of awareness of safety measures and guidelines among journalists was also cited as a problem. Hammad Rind of the Balochistan Union of Journalists added that reporters and editors often cross the line between journalism and activism. Partisanship, he said, or supporting one point of view also puts media personnel at risk.

Participants also emphasized the need for proper follow up on cases of attack on media, and to put an end to the impunity enjoyed by those who target media professionals. The discussion also decided how better to identify those journalists killed and/or injured while performing their professional duties and those killed for other reasons.

Karachi Press Club Secretary Alauddin H.Khanzada bemoaned the role of media owners in particular in following up on cases of attack on journalists. It was also added that families of victims should be provided financial compensation and legal assistance. But, Khanzada emphasized, victims’ families need to take the lead, citing the example of slain journalist Wali Khan Babar, whose brother ensured that those responsible were brought to justice.

The second half of the workshop focused on solutions and the role various stakeholders including media houses, unions, government, law enforcement agencies and civil society organizations can play in improving safety conditions of journalists.

Insurance, promise of compensation, and consistent follow up on attacks of not only journalists and their unions, but also media owners and governments will also improve the overall situation. Proper salaries, including those of district reporters, and implementation of the Wage Board Award were also cited as solutions.