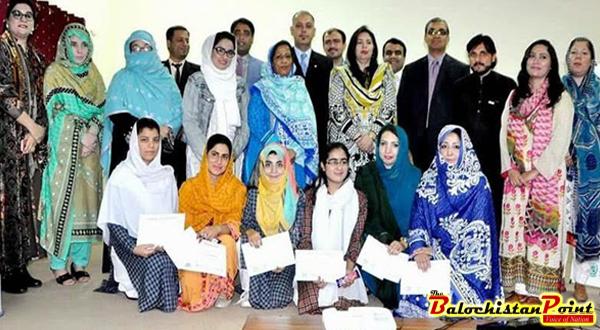 QUETTA: We need to educate the young minds about the contemporary challenges in the very noble act of charity. Active role of youth is essential in informing the masses on the concepts of safer charity in the socio-religious context. This was the message of VC SKB, Dr. Rukhsana Jabeen at an awareness seminar on Safer Charity Practice held at the Sardar Bahadur Khan Women’s University Quetta.

The seminar was part of a wider outreach campaign being run by the Ministry of Information Broadcasting and National Heritage, to apprise people with exercising caution while donating.

Dr. Anjum Pervez, registrar SKB, assured that their students will be active ambassadors of change in raising awareness regarding the campaign. He also appreciated the government’s efforts in running a campaign on an issue that requires immediate attention especially keeping in mind the current wave of terrorism.

Ms. Mehwish, Head of Department of Mass Communication, Ms Wasima, Head of Fine Arts Department, SKB were instrumental in organizing and urging the students to write comprehensive essays and create aesthetically pleasing posters for the competition announced by the ministry.

An introductory presentation on Safer Charity Practice was given by Mr. Nabeel Imtiaz, on behalf of the Ministry of Information, Broadcasting and National Heritage followed by a key note from Mr. Akbar Shirazi , Project Director. Towards the end of the event, cash prizes and certificates were distributed among the winners of essay and poster competitions.

The seminar was followed by an exhibition featuring students’ contributions to the poster competition on the topic Haq Haqdaar Tak.

Published in The Balochistan Point on April 1, 2017