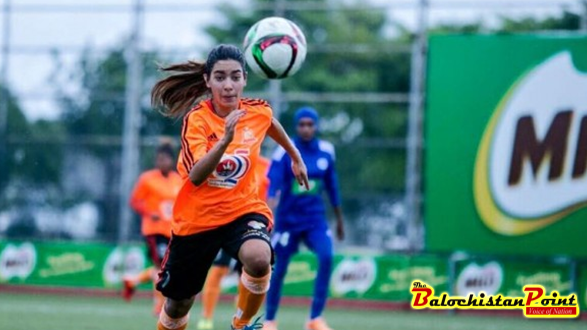 It is not easy to make a name for yourself if you are the granddaughter of the legendary Baloch leader Prince Abdul Karim. (Prince Karim, the brother of the Khan of Kalat, had waged the first rebellion against the State of Pakistan in 1948 to resist Balochistan’s accession with Pakistan). It is hard to establish an independent identity for yourself when your father is a reputed politician and a provincial minister. It is even harder if your mother serves as the law minister of your province. Honestly, it is difficult to pursue your ambitions, that too to become a soccer player, if you are a young girl in Balochistan. Shahlyla Ahmadzai Baloch, 20, Pakistan’s star football striker, crossed all these barriers and established herself as a nationally and internationally recognized and awarded player at a very young age. Her peers envied her.

Shahlyla died on October 13th in a car accident in Karachi. Her death has deeply saddened her friends and family. She was a star of the Pakistani football and a role model for our women. She had set a great precedence for girls not only in Balochistan but for the rest of Pakistan. She was young, ambitious and fearless. She pursued such dreams that are not still considered possible to materialize if you are a girl from Balochistan. She made it to Pakistan’s national football team, represented the national team at international competitions and was awarded the best player of Pakistan thrice in 2009, 2011 and 2013.

I met Shahlyla for the first time when her mother Senator Rubina Irfan was Balochistan’s Law Minister. Forget about the kids, I instantly asked Rubina how she had managed to keep her independent identity while living under the shadow of a politician husband, Agha Irfan Karim. It was interesting that Rubina belonged to the Pakistan Muslim League (Quaid-e-Azam) while her husband was previously affiliated with the Baloch nationalist party, the National Party, and subsequently joined the Pakistan People’s Party. “We have democracy inside our house,” said Rubina. In spite of different political views, the couple worked together to serve their community. That positive attitude also influenced their children.

Both Irfan and Rubina were extremely instrumental in encouraging Shahlyla, who was 15 when I met her, and her other sisters pursue her dreams to become a football player. As a matter of fact, when Rubina was appointed as the head of the Pakistan Women’s Football Federation, there were hardly any girls in Balochistan willing to play football or whose parents would allow them to join the game. Rubina went ahead and brought her kids to give a new life to women’s football in Balochistan.

While Shahlyla set a great example for women in Pakistan that you can pursue your dreams and become who you want to become instead of living under the shadow of your parents, Irfan and Rubina played the same role as Ziauddin played in the making of his daughter Malala Yousafzai. There is one thing common between them: They did not clip their daughters’ wings.

Shahlyla has died too young but with her departure she has left us a clear message: You don’t need a long life to accomplish great things. You may belong to an underestimated place yet you can surprise your critics with your performance. She did an excellent job in disproving critics who did not have in Balochistan’s women. Likewise, there are great lessons for parents in Balochistan to learn from Shahlyla’s life: Your daughters can accomplish great things in life regardless their age and background as long as you trust and support them. Shahlyla will undoubtedly be remembered as Balochistan’s greatest female sports icon. She will inspire our many generations to come. (Courtesy: www.balochhal.com )

Published in The Balochistan Point on October 14, 2016