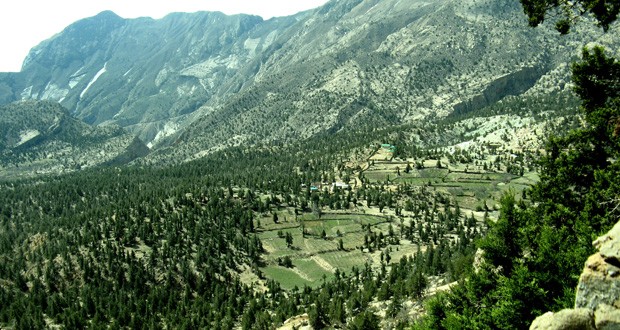 Balochistan covers 43 per cent land mass of Pakistan and its enormously rich in mineral resources, having a long coastal belt. However, it has only 0.2 per cent forest cover of total forestry of the country.

Consisting of arid plains, deserts and rugged mountains, Balochistan is unique in terms of forests as it has been bestowed with world’s second largest juniper forests which are located in Ziarat and Harboi area of Kalat districts. Balochistan has eight different ecological zones with a huge biodiversity that also distinguishes it from the rest of the country as for as environment is concerned.

Forests play an important role in strengthening the economy of any country besides meeting a number of other human needs. They are also crucial to maintain fast changing weather patterns. But unfortunately, akin to other sectors in Balochistan, less focus is being paid to protect, preserve and increase forests’ cover in Balochistan.

Juniper forests spreading thousands of hectares in Ziarat and Harboi are not less than blessing for the Balochistan but unfortunately they are being chopped off persistently. Though UNESCO has declared Ziarat juniper forests a “biosphere reserve”, yet the cutting of juniper trees is on the go.

Similarly, Balochistan has both tropical thorn and mangrove forests in Gwadar, Pasni and Lasbela.

In the north of Balochistan, the Zhob and Sherani districts have unique forests of Pine-nuts and olive which are much valuable in terms of exporting and usage for medicines and other purposes.

According to environmental experts forests should at least cover 25% of the province to maintain an ecological balance. However, the forest cover of Balochistan is shrinking very rapidly as majority of districts of Balochistan are without gas facility, and people are left with no other options but to chop off trees to cater energy demand.

Mangrove forests are very important for the protection of coastal areas from cyclones but they are being cut to provide fodder for livestock and to be used as fuel besides fulfilling other usages.

More than 70 per cent people in Balochistan are directly or indirectly linked with agriculture and livestock, and in this connection increasing the cover area of forest is indispensable. Environmental experts also attach forests essential for the replenishing of ground water, protection of fertile plains from flood erosion and maintaining ecosystem, but authorities concerned are in a state of dormant.

On the other hand, lack of rain and long spells of drought are further aggravating the situation as owing to lack of rain, the rangelands are disappearing fast. Thus, people associated with livestock are left with no other choice but to sell their cattle at throwaway prices.

The incessant cutting of forests is showing its impact on climate change either while the extinct species of trees are diminishing. Similarly, illegal cutting of trees is also seriously affecting wildlife and wild herbs.

Experts say deforestation is an important factor in global climate change, contributing around 18% of all Co2 emission, worldwide. Besides, it is a root cause of loss of biodiversity, and of diminished water quality and quantity.

The year 2011 was declared as the year of forests in Balochistan but it had little impact, because it was not taken seriously nor steps were taken to augment forestry cover. Now, there is a need for taking effective action to protect the forests and wildlife so that the climatic changes could be slowed down.

Local communities are highly dependent on forest resources both for providing fodder for livestock and to meet their energy demands. Thus, government has to come up with providing gas facilities to the local communities and the department of forests has to devise a comprehensive strategy to protect and increase forest cover of the province.

There is an urgent need of revamping the Forests and Regulation Authority which was established in 1927 and according to that a fine of Rs 5 has to be paid by a person found chopping off a tree.

Serious steps are needed to preserve the juniper forests of Ziarat and Harboi besides, the forest of pine-nut and olive in northern areas of Balochistan need especial care of government. Creating awareness among the people about the importance and utility of forests is also necessary as without cooperation of people the forests could neither be expanded nor preserved. There is also a need of increasing forestry areas in desert areas of Noshki, Chagai and Kharan by planting those kinds of trees that could resist drought and survive with least water.

Author is a Staff reporter of The Balochistan Point.