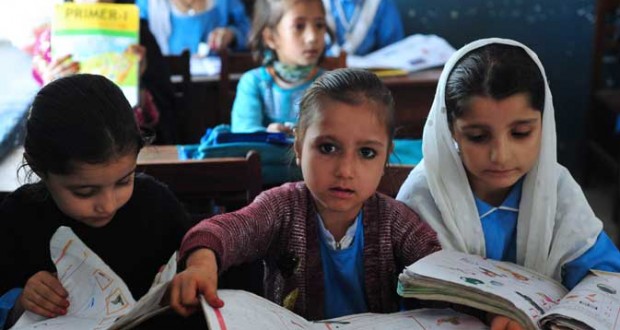 A 16-year old girl standing in the United Nations’ headquarter, addressing hundreds of well known officials form around the world, having pledge in her voice and rationality in her words who was gunshot for only a desire which in fact is one of her fundamental rights.

Today in this 21st century, every young girl has the same desire, “a desire to be an educated and empowered woman”. Malala Yousafzai supported female education in a society where empowering girls is considered “Haram”(religiously restricted), where as in the point of fact education for both men and women is equally supported in religion Islam.

Today again thousands of Malalas are being vulnerable to circumvallate themselves at homes instead of sitting in their classrooms of schools. This time the victims are the Malalas from Balochistan. A province that had never been threatened by any religious extremist groups in the history before however today is a victim of an unknown religious extremist group that had been threatening female education.

Despite the fact that the Baloch had always remained wholly bound with its culture, this particular race had conferred no interest towards religious extremism. The Baloch society is structured on some of its meticulous mechanisms and women empowerment stands out of all other mechanisms. Primarily Baloch populace is a very secular race by the means of religious beliefs and it effusively encourages female education.

The biggest example of this fact is the recent protest against the previously unknown religious extremist group that had been threatening female education in the Pakistan-Iran bordering district Panjgur. Thousands of people including teachers, students, their parents and other residents protested against the threats to female education through a protesting rally this Monday.

Pangjur as one the very first hub of educational spring in Makran has always remained the nucleus of the driving educational air.  Recently the schools and English language learning centers are confronted by threats to female education through threatening letters and various attacks by a hidden religious extremist group that has been stimulating edginess amongst the female students, their parents, private schools and English language centers from the beginning of this month.

An English Language center’s teachers in Washnood, Panjgur were threatened and tormented by unidentified gunmen early this month. On the other hand pamphlets were sent to all the private schools threatening them to stop educating girls. A school van was burnt whilst it was about to leave for school early in the morning on 14th May.

The schools and language centers remain closed days after the threats and attacks where as a shattering blackout by the government as well as the main stream media in terms of addressing the issue has increased the restiveness of the Baloch populace again.

Lack of educational institutions and negligence of government toward education in the geographically largest province had already tackled the habitants. Balochistan stands on the lowest step of illiteracy not only among the country’s other provinces but among the provinces or states of all the neighboring countries as well.

Though, Balochistan is challenged by political and economic crisis, and poverty has dominated vast areas of Balochistan, but it’s not true that this province is ranked last for everything, definitely it stands alone on the top regarding natural resources and mega projects for instance the Deep Seaport Project in Gwadar, the Reko-Diq project in Chaghi which is believed to be the world’s 5th largest gold mine, the Saindak project in Chaghi again, the Natural gas project in Sui, the new road and railway projects from Gwadar to China.

The government has been interested in exploiting Baloch resources but has even failed to establish a single girls’ college in the so-called mega port city where thousands of Malalas have been craving for right to an education. Besides failing to protect the female students of Quetta when fourteen Malalas were assassinated after a suicide bomb attack by religious extremists in June 2013, the government also disregarded to assure the security of the female Baloch professors of Balochistan University when they were continuously threatened. And now the threats to female education in Panjgur, has increased another bullet to comfort Baloch Malalas. Yet, the government continues to remain silent on the whole situation.

The sustenance of Balochistan’s social, economic and civil development tremendously relies on education equally for both genders. If only the thorns in the itinerary of education for our Baloch Malalas are picked up, our women will be empowered and will be able to play imperative roles in each aspect of life, just like the women of the developed nations of today’s world. (Courtesy:  The Baloch Hal)