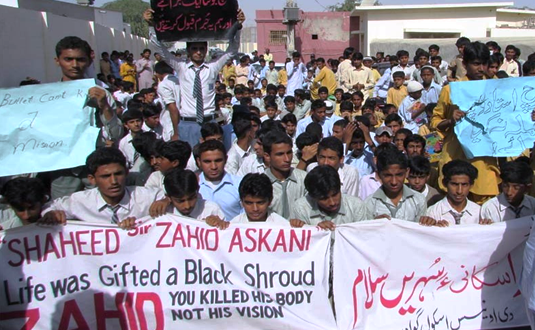 It is the sixth day since two-year old Mehlab has been orphaned by unknown gunmen during the daylight in the port city of Gwadar. Sitting quietly little Mehlab stares at the door with her innocent eyes waiting for her father to come back sometime.

Little Mehlab is the daughter of the well known educationist Sir Zahid Askani who was assassinated on Thursday the 4th December. Leaving the two-year old, a widow and an old father, Zahid also left behind four school systems that he solely ran in the port city and its suburbs.

Zahid Basically belonged to the Iran-bordering district of Panjgur. He moved to Gwadar in late 1999 and opened his first campus of “The Oasis School” in 2002. Forming the dream of an English medium school and an English Language learning center in Gwadar a reality for the first time in the history, Zahid started with a few students and reached to more than a thousand in a decade. Today his students have succeeded in acquiring higher education in different institutions across the United States and several have their own schools and English language learning centers in different parts of Gwadar. He has authored some Balochi books as well as translated a few English books into Balochi.

His martyrdom is a clear message for the people working for educational development of Balochistan to discontinue their efforts. The efforts will lead this poverty stricken province to socio-economic development that might be an alarming situation for some groups, according to the residents of the region.

In May 2013, Malala said in her speech in United Nations, “One Teacher, one child and one pen can change the world”. Today a student of The Oasis School says, “One teacher did change the world of the every child with one pen in the little harbor town but today the same world has been destroyed, the same teacher has been martyred and the same pen turned out to be bullets for our teacher.”

Makran is among the very few divisions of Balochistan that had rapidly been raising their literacy rates in the past two decades because of a few motivated and self driven individuals who instigated institutions of their own after attaining education from abroad. This modern educational campaign began just a few years before the twenty-first century in Panjgur and Kech and reached Gwadar in 2002 as Zahid Askani began his exertions.

Year 2014 has been a challenging year for Makran regarding education because three of the districts had to face unexpected circumstances. The first phase of this dirty game began from Kech since it has a higher literacy rate moving toward Panjgur and Gwadar. The renowned Delta English Language Center in Kech was shut down because it was accused of disseminating anti-state literature.

The second phase began in late April this year in Panjgur when private schools were sent pamphlets by previously unknown religious groups such as the “Tanzeem-ul-Islam-ul-Furqan” and so on. All private schools had to close down after threats from such groups.

The third phase being the most bloodcurdling began last week in the so called port city of Gwadar when the educationist, author and principal of the Oasis school was assassinated in broad daylight in front of his school. His assassination has raised an atmosphere of terror for the students, parents, teachers and school heads not only in Gwadar but in the whole province.

On 8th December leaders of all parties and hundreds of students, after marching from their schools gathered in front of the Deputy Commissioner’s (DC) office in Gwadar and demanded for the arrest of culprits responsible for Zahid Askani’s assassination. The students demonstrated for several hours in front of the DC office. According to the students and various political leaders, government is responsible for the all the unrest in the peaceful city.

In the midst of political and social challenges, issues to education in Balochistan are getting more testing with time. This province is already gripped with its staggering literacy rate that had made her already vulnerable to meet the United Nation’s millennium goals for education.

The threats to education and educators in Balochistan in General and Makran in Particular deserve great attention from the government. Since the present Chief Minister (CM) of Balochistan belongs to Makran, people had immense expectations from him. However his governance led Makran into more critical situations than ever before.

The increasing diverse issues of education in Makran call for coverage by the human right organizations as well as the national and international media. It is the first and foremost responsibility of the government of Balochistan to take necessary actions before the third phase of the dirty game against education in Makran causes further destruction.

Author is a Staff Writer

Published in The Balochistan Point on December 14, 2014