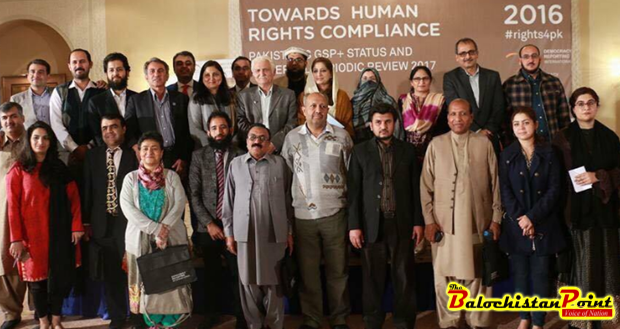 Civil Society and key stakeholders concurred that Pakistan’s National Plan of Action on Human Rights was essential for Pakistan in fulfilling its constitutional and international commitments. These views were highlighted and expressed at DRI’s National conference, ‘Pakistan’s GSP+ Status and Universal Periodic Review 2017’ held in Islamabad on 8 December. The conference brought together over 150 influential stakeholders, including members of civil society, parliamentarians, members from state human rights institutions and political leaders.

Ina Lepel, German Ambassador to Pakistan said: “Pakistan has made progress in the field of human rights. Nevertheless, considerable concerns and many challenges remain, for example, with regards to children’s, women’s and minority rights. The GSP+ trade scheme with the European Union – and the review process that is part of it – as well as Pakistan’s upcoming Universal Periodic Review present unique opportunities to further implement international human rights conventions, of which Pakistan is a state party. Germany will continue to support Pakistan in its efforts to meet the obligations stemming from these conventions, for the benefit of all Pakistanis.”

Jean-François Cautain, Ambassador of the European Union to Pakistan said that GSP+ was an opportunity for Pakistan to promote economic and social progress to improve the rights of its citizens. He believed the status remained a win-win situation for Pakistan, provided effective utilization. Welcoming reform efforts undertaken by the government he cited the formation of the Treaty Implementation Cell (TIC) and the submission of delayed treaty body reports by Pakistan as positive developments. Reflecting on the impending GSP+ review of 2018, Ambassador Cautain highlighted continued serious concerns on a number of human rights issues, including access to justice, the death penalty, freedom of religion or belief and rights of women and children. He stressed the need to achieve positive deliverables ahead of the 2018 review. Representing the government’s point of view, Attorney General of Pakistan and Convener of the Treaty Implementation Cell (TIC) Mr. Ashtar Ausaf Ali’s statement recognised GSP+ as a catalyst needed for the systematic overhaul of Pakistan’s human rights. His statement pointed out that the government had approved and issued the National Plan of Action on Human Rights as well as some important legislation such as anti-honour and anti-rape laws recently enacted. He nevertheless emphasised that laws were of no use if implementation was neglected.

Senator Nasreen Jalil Chairperson of the Functional Committee of Human Rights assured stakeholders that her committee would stand by conference recommendations in order to ensure the deliverance of rights that were under threat and achieve progress ahead of impending reviews.

Mr. Hassan Nasir Mirbahar, DRI Country Representative highlighted that Pakistan’s government had approved an important and ambitious National Plan of Action on Human Rights. He recognised that it covered important legislative and policy reforms on key human rights issues. He acknowledged that such reforms would be crucial for democratic stability and help in compliance with Pakistan’s international human rights commitments.

Senator Farhatullah Babar said political parties should take ownership of the human rights agenda as citizens mandate them through elections. He added that all parties should form human rights cells and make serious efforts for the realisation of human rights in the country. “Human rights are important as universal rights, it is not just the GSP+ status that we should care about,” he said.

Published in The Balochistan Point on December 17, 2016