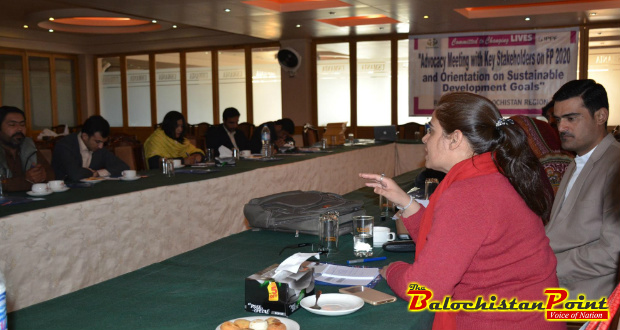 Quetta – Support of Media and Civil Society was urged in Achievement of Sustainable Development Goals (SDGs) in an advocacy meeting, on Wednesday.

An Advocacy meeting with representatives of Media and Civil Society on FP-2020 and orientation on SDGs was held by Rahnuma – FPAP Balochistan in a local hotel of Quetta.

Samina Khan, Member of Provincial Assembly (MPA) and Chairperson of Standing Committee for Education was chief guest of the meeting.

“Legislators of Balochistan Assembly only fight for their schemes and that’s why important issues such as Family planning are ignored,” Lamented Samina Khan.

She further added, “We only have to correct our management to solve the critical problems such as child marriages.”

“Current Maternal Mortality Ratio (MMR) in Balochistan is 785 and the targeted MMR in SDGs is 70,” revealed Mr. Nasar.

Regional Director Rahnuma FPAP Balochistan also urged media to cover issues of social sector and find a place for them in different forms of news mediums.

Published in The Balochistan Point on November 19, 2015