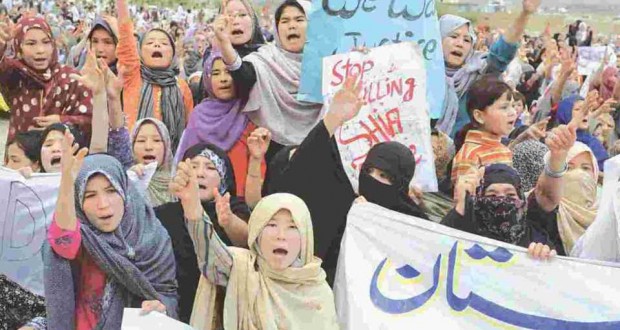 Last year the former chief minister of Balochistan, Aslam Raisani, responded to a journalist’s question regarding the massacre of the Hazara community at Mastung: “The population of Balochistan is in millions, 40 dead in Mastung is no big deal.  I can send a truckload of tissue paper for them to wipe their tears.”

Did the former chief minster respond to lessen the grief of the victim families? The aforementioned sentences, no doubt, spells out the seriousness of the behavior of responsible authorities and government’s representatives, towards the killing of the ethnic Hazara community in Balochistan. Though, Aslam Raisani has gone, we see the same untold stance against Hazaras in Balochistan, and a rapid increase in their systematic killing.

The Hazara population is the victim of sectarianism but this can be named the victim of security as well. Because the government always makes claims about the solid security measures to protect this Shia community, yet the suicide attacks and target killings continue in Quetta.  June 30 was another bloody day in Balochistan, when thirty-one people were killed and over 65 others injured when a suicide bomber blew himself up near an Imam Bargah in the Aliabad area of Hazara Town.

The people belonging to the Shia sect, including children and women, lost their lives, and still a large number of wounded ones are in a critical condition. Routinely, the banned sectarian militant organization Lashkar-e-Jhangvi (LeJ) claimed responsibility for the attacks.

Prior to this, an attack was carried out on June 15, in Sardar Bahdur Khan Women’s University, when about 40 students and teachers from English, Mathematics and other departments were in the bus going home after classes. Twenty-two students were injured by the powerful blast and 14 students were killed.  After the attack, when the injured were shifted to the Bolan Medical Complex, a male suicide bomber and other heavily armed militants struck the building and fired indiscriminately. As a result of multiple strikes the death toll rose to twenty-six.

In six months, the Aliabad attack was the 8th suicide attack, and in these attacks 312 people have been killed and more than seven hundred have been injured. The dead ones include women, children, policemen and most of the people belonged to Hazara Shia community.

It is crystal clear, after the Baloch nation, the Hazara community is most unprotected and in a precarious situation. The Hazara minority in Quetta is suffering from extreme persecution and violence. Hazaras are said to have been living in Pakistan since the 19th century, having fled to British India from Hazarajat when they were being persecuted by Emir Abdul Rahman Khan. The Hazaras are mainly Shiite Muslims in the Sunni-dominated area of Quetta, the capital city of Balochistan. Hazaras are easily identifiable due to their Mongoloid features.

Since 1999, in the attacks carried out against a defenseless Hazara population, more than one thousand people have been killed and thousands injured. There are a number of disabled ones who became paralyzed in the attacks against them. Over half a million Hazaras now live in permanent fear.

Due to the poor security situation and loss of property, and death of family members, the victims of sectarianism have fled to Iran, Australia and New Zealand or other parts of the world. However, hundreds of Hazaras who fled the country are living in detention centers in Indonesia and Australia; moreover, those who seek asylum confront hardship and misery.

The political workers, social activists and   community members of the Hazara population say that more than 70% of the Hazara students have quit their educational career at universities and other institutions. The fear of being hit has also affected attendance in the schools. Parents do not let their children go to schools and universities or get formal or informal education due to the sense of insecurity.

After every attack on Hazars, high-alert security is claimed but the systematic killing takes place again very smoothly, claiming loss of human lives in large number. It is beyond one’s understanding why this population being close to Quetta Cantonment and security alert areas, is killed without any hindrance. Hazaras hold the security forces responsible for failing to protect them; however, some of them say that the institutions have not failed rather they lack the intention to protect Hazaras from the terrorists.

The Hazaras in Quetta have always employed democratic means to fight back the systematic killings but they never gain the attention of responsible authorities. So far, only a single unique protest by Hazara community has been successful, when after twin attacks on January 10, 2013, more than one hundred Hazaras were killed. Thousands of people from Hazara community held a sit-in, with one hundred coffins.  After 24 hours, their protest gained the attention of the Prime Minister of the time, Raja Pervez Ashraf, and the Governor of Balochistan, Zulfiqr Ali Magsi.

This protest led to imposition of Governor’s Rule in the province. However, subsequent attacks on Hazaras prove that the Governor’s Rule was no solution. (Courtesy: Viewpoint)