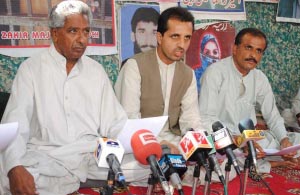 Task force is a tool to further delay the issue: VBMP

Quetta: The Chairman of Voice for Baloch Missing Persons (VBMP) Nasarullah Baloch has said that Task force was a tool to further delay the issue.

He said the administration was resorting to delaying tactics in the arrest of former ISI officer Brigadier Siddique, despite clear directives of the apex court.

He said this while addressing a press conference along with the family members of Ali Asghar Baloch, at a token hunger strike camp set up outside Quetta Press Club for the recovery of Baloch missing persons.

He appealed to the Supreme Court of Pakistan to summon the IG Police and ask him as to why the accused had not been arrested yet. He also demanded action against IG Police Balochistan. He said that the family members of the missing persons spent their days and nights outside the apex court seeking its support.

He said that, Balochistan Chief Minister (CM) of Dr Abdul Malik Baloch, during his visit to the hunger strike camp, assured to them of his commitment in solving this issue on a priority basis. However, he said that the CM like his predecessor spent most of the time in Islamabad.

He also expressed his lack of confidence in the task force set up by the government for the missing persons, saying that the heads of those institutions were included in it, who have been involved in the forced disappearances of people.

He said that VBMP rejects this task force and takes it as a tool to further delay the issue. He added that if lawyers, human rights activists and journalists had been included in the task force, they would have placed more trust in it.

Published in The Balochistan Point on July 27,2013