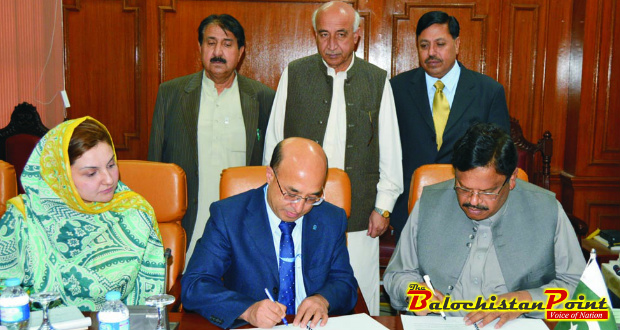 Quetta – Chief Minister Balochistan, Dr Abdul Malik has said that imparting technical training to women would not only create job opportunities for them but it would also reduce poverty in the province.

He expressed these views at the signing ceremony of Memorandum of Understanding (MoU) between United Nations High Commissioner for Refugees (UNHCR) and Government of Balochistan, here on Thursday.

MoU was signed by Secretary for Labor & Manpower Balochistan Hamid Al–Kareem and UNHCR’s representative Mr. Dinesh Shrestha. This project, Women Technical Training Centre (WTTC), costing $ 103 million would be established in Loralai district of Balochistan which would impart technical training in four various trades. Besides through this project the incumbent technical centre for males would be renovated and it would be provided with latest equipments.

If more than half of a society is cut from economic activities then such society would never progress – Dr. Malik Baloch.

Chief Minister Balochistan, Dr Abdul Malik Baloch said that WTTC would play a vital role in providing technical training to women that would open opportunities of employment for women. “If more than half of a society is cut from economic activities then such society would never progress,” he said, adding that women should also play their crucial role in economic activities.

Chief Minister said that by initiating such projects for women it would help to a great extent in reducing poverty from the society.  “Provincial government would extend every possible support to international organizations in establishing technical centre that impart quality education to the people,” he assured.

Aim of this project is to increase livelihood opportunities for women folk living specifically in Zhob division – Dinesh Lal Shrestha.

Dinesh Lal Shrestha said that the aim of this project is to increase livelihood opportunities for women folk living specifically in Zhob division particularly in Loralai district.

Published in The Balochistan Point on October 22, 2015