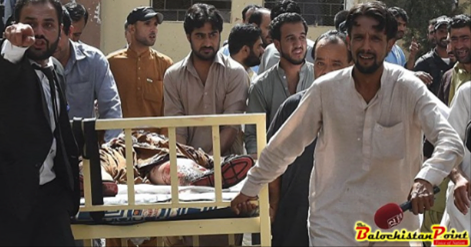 The continuous bloodshed in Quetta: Who is to be blamed?

The morning of 8th August was alike every other day when Mahrang walked to her school carrying her books; weaving thoughts of becoming a professional someday just like her lawyer father and his colleagues. She had no idea the forth coming few hours would utterly shatter her life and the dreams she once unraveled.

Just after four hours of her arrival at school, she noticed many of her family members and friends marking safe after facebook had activated “safety check” feature following the deadly blast. She knew something had gone wrong somewhere within the boundaries of her city that had experienced several such incidents previously nevertheless what she did not know at that very moment was that her father was amongst the victims!

Mahrung is only one of those innocent kids who were orphaned in the morning of 8th August in the capital of the war tackled province during a suicide bomb attack in the Civil Hospital that took 74 lives and injured more than a hundred.

This is not the first time Quetta experienced bloodshed of innocent citizens. In the last decade there have been over 27 such attacks that have so far taken lives of 532 people and injured over 1173 according to the South Asian Terrorism Portal. The SATP also claims that 53 lawyers were killed in Pakistan from 2001 to July 2016 however the recent tragic incident decimated the entire legal community of Balochistan killing 64 lawyers in a single day!

This raises serious question marks on the security measures within the province in general and the provincial capital in particular. Even after the current government increased the budget for maintaining law and order by 12% and prioritized security measures over education spending 30 billion out of 218 from non-development funds of provincial budget 2016-17 and after 200 CCTV cameras have been installed in highly venerable areas of the city, yet the results are bloodcurdling.
On the other hand it has not been that long when Chief Minister Balochistan Nawab Sanaullah Zehri made the statement during a seminar on sustainable development of Balochistan “The law enforcement agencies have played a vital role in restoration of peace in the province.”

In fact failing to sustain peace in the province in actual, the CM Balochistan forgot to mention that it is still not the time for Balochistan and Quetta particularly to take a sigh of relief and not even in the coming time if serious steps to combat terrorism and for the maintenance of law and order are not taken.

Despite the allocation of Rs. 2 billion for the security of Quetta, the situations seem to worsen with the increasing frequency of terrorist attacks and the pathetic steps of the law enforcement and security agencies to counter terrorist attacks.

Out of the Rs. 71 billion allocated for the development projects throughout the province, it has never been a matter of concern for a single member of provincial assembly to allocate funds for better facilities in hospitals and establish trauma centers even in the provincial capital that has been the hub of terrorist attacks repeatedly when patients suffering from major traumatic injuries need to be taken all the way to Karachi.

On the other hand funds for 4 rest houses in Khuzdar the home town of the CM Balochistan have already been allocated. Prioritizing rest houses over other serious necessities in the poverty tackled province is a huge matter to be concerned about.

Blaming foreign counterparts for undermining Pakistan’s security is characteristic to the politicians after every massive attack however such statements do not make much sense when the country claims to have a powerful military, security agencies and massive funds allocated for the maintenance of law and order.

These might pay little to counter unrelenting terrorism as they previously did. To circumvent further crisis which the extreme need of the hour is, government authorities and policy makers first have to step out of their comfort zone that consists of their self-interests and benefits. Subsequently they need to reinforce long term peace-building approaches and strategies that would help address conditions conductive to flaming violence and need to prioritize safety of those who reside in the terror-dominated valley specifically and in the province as a whole.

Today not only kids like Mahrung are suffering but the masses in Quetta and entire Balochistan live in fear after the unremitting bloodshed of hundreds and particularly massacre of 64 topnotch lawyers in a single day. It is indeed prime time for the government to take major steps not only to allocate funds for security but to impose strategies to implement powerful security measures in actual to counter terrorism attacks by extremists or else with the continuous frequency of bloodshed, there will remain no one to carry the coffins.

Published in The Balochistan Point on August 14, 2016