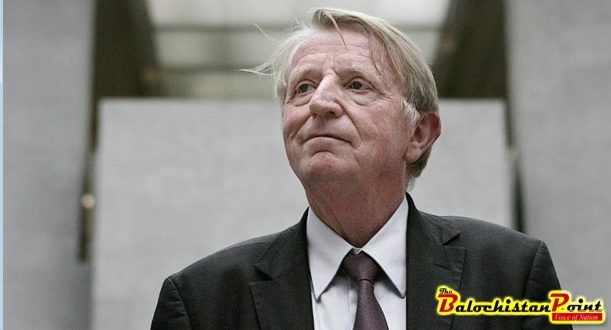 It was early February, 2005.  We were heading to Mehrgarh. Seated in the car with me were Professor Jean Francois Jarrige, the famous French archaeologist and Mrs. Kathien Jarrige. Both were full of feelings and fear. An unusual impression of dismay was evident from their faces. During the travel they talked but with interludes. Sometime the pause was prolonged. Perhaps they entertained flashbacks and visualized the fine days of those 30 years of their life they spent away from the glitters of Paris, staying on the site of Mehrgarh, excavating one of the major seats of early civilization dating back to 7000 BC.

Professor Jarrige was a world-famed archaeologist and a personal friend of President of France who had been pained by the news of damages caused to Mehgarh site, resulting from tribal feuds of the area. It was believed that the French President took up the matter in a summit meeting and was assured that Dr. Jarrige’s grievances would be addressed at the highest level.

A meeting was convened at Foreign Office, Islamabad wherein, in response to apprehensions expressed, I assured Professor Jarrige and Kathrein  Jarrige on behalf of Government of Balochistan that they ‘would be looked after well and would be provided befitting security at site, in case they wanted to continue excavations at Mehgarh or any other adjacent location’. After deliberations, it was decided that Professor would remain in touch with the authorities at Islamabad that, in turn, would convey his programme to the province. In fact I was looking forward to his visit as well as resumption of excavations further as, according to him, the adjacent areas might be hiding evidences that could lead up to 11000 years and beyond.

Professor Jarrige was a soft spoken learned scholar who gave the world a breakthrough on a blank archaeological zone that was peeping through scant evidences scattered here and there, particularly in broken pieces of pottery etc. His hard labour of about three decades not only saved the world of knowledge from groping in dark about genesis of civilisation in the region and the world but also skyrocketed Balochistan glaringly to the super importance of a civilization-giver. His research papers, lectures and field notes were received with scholarly reverence all over the world, including France, his country. Soon he became iconic in the field of archaeology and was one of the most sought after archaeologists to be invited to world famous seats of learning, particularly universities of high repute across the globe. The couple took those assignments in line with the scholarly tradition but their most favourite station was always Mehrgarh.

As we were negotiating bumps and loops of Bolan Pass, Professor Jarrige was scrolling through his memory and was sharing his experiences of the past thirty years while unearthing history and heritage at the unique site at the backyard of Dhader. As he revealed, initially their team was working at and around Ornatch. Due to deteriorating law & order situation in the area they had to give it up and move to the eastern contours of Balochistan. He was not the team leader then but second in command. Professor Jarrige took the charge when his team leader died, after a brief illness, in the field. Then it was not Mehrgarh but some of the auxiliary sites not too far from it.

Realising that he was sad at heart, as mentioned earlier, I preferred interludes of silence so that they should converse and rest as well. They used to speak in low voice and in French. What I could guess from expressions and tones, they were saddened by what had happened to Mehgarh, perhaps that was something beyond their comprehension. Then they turned to English and included me in discussion with regard to Bolan, colonial past and the railway zig zags, passing trains etc. I shared with them my limited knowledge but preferentially tried to know from them about Mehrgarh which was more important than anything else. And they were eager to share and were amused sometime to tell me interesting stories of their stay and work. Also about their wonderful team.

As Professor Jarrige recalled, “we didn’t know about Mehrgarh at all. It happened that once Nawab Ghous Bakhsh Raisani came to see us on the site in the outskirts of Mehrgarh. He was a knowledgable thorough gentleman and was very keen in archaeology. He mentioned Mehrgarh to us and presented it as a promising site, archaeologically. He invited us to have tea and took us around to various dumps and mounds with considerable number of pottery pieces scattered. That was our first encounter with Mehrgarh that turned into a binding perpetual love “.

Dr. Jarrige spoke very high of Nawab Sahib and was appreciative of his outright help and patronage as long as he lived. But today as we proceed to Mehrgargh, that may not be the same place Jarrige and Katherine left last time. It had suffered tribal wraths and ransacks that echoed throughout the world. So much so that President of France, who was also a close friend of Professor Jarrige, took up the matter with the President of Pakistan and asked for personal intervention in the matter. The air was thick in Islamabad with the gossip maintaining that among all reactions, the French was the louder.

As the car entered archers of Professor Jarrige’s site-office cum residence, burnt trees on both sides of the narrow road greeted the couple as a prologue to a sad story. Security personnels, their old acquaints servants and some locals gathered there and the place was a bit crowded. The couple, after exchange of brief greetings, checked rooms, store etc. and were shocked at the bruised scene of the site office, once well organised but now shattered.  With grim faces and heavy hearts they used to go from room to room, come out, stop suddenly  to grumble and move again. Madam Katherine pointed to her local body guard admiring him for serving the couple with devotion for many years. They also paused to share impressions of good old days saying that “we used to come here even late in night driving a jeep from Quetta to Mehrgarh. We had no fear. Everybody knew who we were. On way, sometime we used take tea at straw-roofed road side cafés. Yes, then it was different “.

Earlier, while we were at Dhader Rest House for a brief stopover for refreshments, I discussed with the Professor about the possibility of a lecture to a select audience, at Quetta on his return, as he was going to stay for few days on the site, Mehrgarh /Dhader. I also explained that I would be requesting the Honourable Chief Minister Balochistan and Excellency the French Ambassador to jointly chair the occasion. Professor Jarrige was pleased with the idea and consented for it. I truly rejoiced as distinguished audience of Quetta would hear for the first time about Mehrgerh directly from Dr. Jarrige, the arch archaeologist and Chief excavator of this wonder-world, Balochistan’s magnificent contribution to humanity.

After ensuring security and stay arrangements at Dhader, I left for Quetta for, beside others, to do our homework with regard to the lecture seminar. Both Honourable Governor and Honouable Chief Minister appreciated the idea and invited Dr. Jarrige to a cup of tea on his return, to be scheduled as per his convenience. Both the meetings commenced in my presence which were loaded with deep insight on Mehrgarh. His Excellency, Mr. Pierre Charasse, the Honourable Ambassador of France, took time out to travel from Islamabad to Quetta to grace the occasion.

It may not be out of place to recall here that the then Chief Minister Balochistan, Honourable Jam Yousuf himself was keenly interested in archaeology and used to put me questions about Mehrgarh. I remember once I convened a National Seminar on Mehrgarh that he inaugurated as the Chief Guest. After the inaugural session and refreshments, Jam Sahib, very kindly enquired “If the Conference won’t be disturbed, I want to set here in the side room and listen to the papers going to be presented in the Ist Session “. I always admire him for his interest and thirst for knowledge,  that I observed on several occasions.

On Feb. 8, 2005, Serena auditorium was full with distinguished audience as if it was the kind of presentation they had been waiting for. We enthusiastically received Professor and Madam. They had a look at the auditorium, took me to a corner and confidentially told that “during my lecture / presentation your guests on the stage ( i.e Chief Minister, Minister of Culture, Ambassador of France) will have to go down and join the audiences”.

From the bureaucracy perspective it was a bit strange, I thought it would bother the distinguished panel members and might offend them. Moreover, the first row, occupied by dignitaries, would be unnecessarily shuffled and displaced… etc. I requested him to appreciate that they were high-status individuals including his Ambassador, they might feel it. Getting them seated on the stage is not only tradition but also part of protocol. But that was what a Secretary could think of. Madam Jarrige turned to me.” Protocol is important or the lecture “.

Well, the programme commenced in two parts. Welcome Address by the Minster Culture, Waja Sher Jan Baloch, followed by his Excellency the Ambassador of France and then the Honourable Chief Guest, Chief Minister Balochistan.  I had the honour to conduct the proceedings. I introduced the Honourable Speaker, Professor Fracois Jarrige and before inviting him to speak, made a humble request to the distinguished honourable panel to kindly consider joining the audience for a clearer view of very pertinent and rare slides, Professor was going to exhibit. They agreed and with some adjustments, the first hand authentic presentation on Mehrgarh ever made on Balochistan’s soil, went on with full colours, decorated with slides and scientific explanations. The audience shuttled with curiosity and enthusiasm swinging between 7000 BC and beyond to the present day, in a state of pin drop silence.

During discussions I could guess that it was going to be Professor Jarrige’s last visit to Balochistan. Though he did not announce, his interest had already shifted to China and Afghanistan. Once he made a passing remark that despite assurances from Government and Nawab Raesani, it might not be possible to ignore the risks. He also mentioned Sardar Yar Muhammad Rind who, according to Jarrige, had sent him an invitation to come and resume work, assuring him security, which he appreciated.

Then he smiled “well archaeological sites and archaeologists are always at risk unfortunately everywhere in the world “.

Professor Jarrige is no more. He passed away in Paris on Nov. 18, 2014. But his phenomenal contribution to archaeology and civilization will live on indefinitely. He was a true friend of Balochistan, of Pakistan, of heritage and indeed of humanity.

Published in The Balochistan Point on March 7, 2018