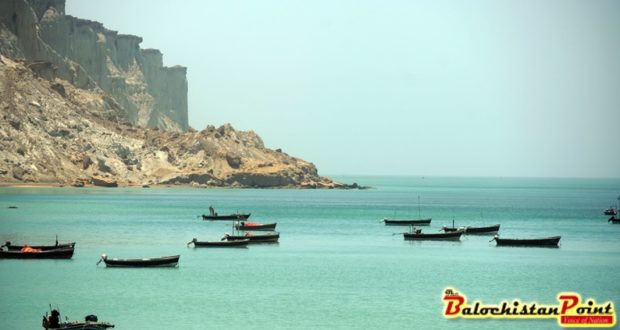 The Plight of the Gwadar Citizens

As the fireworks lit up the port-city of Gwadar for its 60th year celebration of being a part of Pakistan, its citizens seem lost somewhere between the brightness of promises of future development and darkness of their unresolved issues.

Gwadar, with its deep-sea port and the ambitious project China Pakistan Economic Corridor(CPEC) is all set to emerge as one of Asia’s largest economic hubs by 2030. Before ending up with its current status, this hammer-head shaped peninsula has gone through various processes.

From 15th century Portuguese occupation to nearly 200 years of being an Omani enclave, this harbor village of fishermen communities, was long recognized for its strategic location. Today, with an annual growth rate of nearly 3%, it is one of the fastest growing districts of Pakistan but what exactly has the port and CPEC brought for this growing population?

Right now, however, increasing protests by the local population for their livelihood and water, the arguments by the activists backed by statistics from Human Development Index (HDI) show that there has not been development for the people as much as perhaps there should have been.

For instance, even with all the attention Gwadar has received in the last 15 years as an “economic hub”, it still stands in the list of cities with “Low Human Development” in the UN’s Human Development Index (HDI).

Gwadar is even ranked 78th in terms of human development out of 114 Pakistani cities. “The Port’s master plan includes economic as well as social development for Gwadar,” Munir Jan, Director General (P&D) Gwadar Port Authority told Balochistan Review. He, maintains there has been inconsistencies with planning, policy making and implementing by the federal government ever since the Port was developed in 2005. This perhaps has resulted in lower human development in the city. He, however, is optimistic with the recent progress, “After 2013, as CPEC project came forward, we witnessed a marked change. If the projects under CPEC continue to work, we will definitely experience an improved position for Gwadar in the future HDI reports.”

Dr. Sajjad Baloch, Director General Gwadar Development Authority told Balochistan Review, “When there is dearth of basic facilities and social services, human development will be low. But now, since things are improving, there is hope that Gwadar will have a better place in terms of human development in near future.”

Although between 2013 to 2015, Gwadar’s rank in HDI moved up, this minor shift from 79th to 78th out of 114 cities cannot measure the success of CPEC in Gwadar. It is important to look at lives of local people to better understand where they stand in the big picture of development.

“We know rightnow Gwadar is going through a crisis. From modern day facilities to even what we know as basic necessities like water, electricity, livelihood, sewerage system, you name it. This city is deprived of everything one can imagine. And yet, it is the metaphor for hope not for its people but merely for economic fortune it carries,” Barkatullah, a youth activist from Gwadar told Balochistan Review.

Barkatullah formed an organization to defend employment rights of local youth in 2012 and since then many other organizations and activists have voiced for the rights of indigenous population. One of many such organizations is the Gwadar Meed (fishermen) Itehad. These days activists from this organization are busy protesting against the East Express Highway.

One of their representative, Yunus Anwar told the Balochistan Review, “For the last two months we have protested, held several press conferences, reached out to the government representatives but so far we have seen no results.”

As part of the China-Pakistan Economic Corridor (CPEC), the 19 kilometer, six-lane express way will connect Gwadar port with Makran Coastal Highway. This ambitious project will provide a direct link for the cargo traffic to and from Gwadar Port, but what concerns the fishermen is the fact that it will block 4.3 kilometers of coastline.  It is where all the fishing communities live.

“The fishing communities have lived here for centuries and fishing is all they know. If this part of the sea is blocked, where else can they move to make a living?” questions Yunus.

The fisherfolk demand for three underpass access points 200 feet wide each in three of the fishing neighborhoods of Gwadar. However, in the Express Highway design, they are only 15 feet wide.

During a press conference in Gwadar held last month, the fisherfolk presented the list of their other demands which include; 80 feet long and 40 feet wide auction hall to sell fish, a protection wall at Sur Banden to avoid more land erosion, scholarships for the higher studies for the children of fishermen, job opportunities at port and a resolution in Balochistan Assembly for the protection of fishermen’s rights.

While Gwadar Port Authority is constantly negotiating with the fisherfolk, the protests still continue. “So, far we do not see any changes in their design and what we fear is that one day all the fishing communities will have to leave,” says Yunus.

On the other hand, officials in GPA told Balochistan Review that they formed a committee last month with the approval of Dostain Jamaldeeni, Chairman Gwadar Port Authority to resolve the issues of the fishermen and since then it has been in constant negotiations with the fisherfolk.

Even before the committee was formed, the concerns of fisherfolk were taken into account according to the officials of Gwadar Port Authority (GPA). For instance, the construction work along the 4.3 kilometer of the highway was divided into four stages so that the fishermen continue fishing in the rest of the area while construction went on at the other segment at a time.

“GPA is concerned with the issues of fisherfolk and the demands they have brought forward. Hence, we also prepared and submitted a plan to government of Balochistan for suggested solutions to the issue,” Munir Jan told Balochistan Review.

This is not the only issue the fishing communities have. The number of fish in Makran Coast is decreasing, and part of the reason is the large illegal fishing vessels. For the last 15 years, the illegal vessels have not only been threatening the marine ecology but also the livelihoods of local fisherfolk. “There is not much in the sea these days, at least not in the places where we are allowed fishing,” complains Asif, one of the fishermen.

In the recent years, due to the security concerns for the port, the fisherfolk are allowed fishing in certain areas of the sea.  This and many other fears of these communities have yet to be addressed.

Water is the other big issue of this port city. The nearest Ankara Kaur Dam has completely dried. Two newly completed dams have yet not been connected with the city. “It has not rained for the last three years, it does not really matter if the new dams are connected with the city or not,” Asif told Balochistan Review.

Right now, the water is trucked in each day from Mirani Dam, 150 kilometers away from Gwadar city. This quick fix is draining the provincial budget, but the government authorities have yet not come up with any better solution. In the last 10 years, three desalination plants were established but to date none is functional.

Talking to the Balochistan Review, Sarwar Mengal Executive Engineer of Public Health Engineer Department (PHE) explained, “Since the dams have gone dry because of no rain, for the last three years the only way to provide water to the city is through tankers. We have a large number of tankers and trawler-tankers trucking in water from Mirani Dam each day. It is risky and expensive, but it is the only way water can be provided to the citizens. For the last one and a half year, this is how we government has been helping the citizens.”

Even with the quick fix, government is often unable to pay the tankers on time. In such situation, as the tanker owners protest, the citizens are held hostage. “Having the sea – as a huge water resource on all three sides of the city, Gwadar is still thirsty. It is not because we do not have resources, but it is because the higher authorities do not seem interested to make things better for people who live here,” Barkatullah told the Balochistan Review.

The officials at PHE maintain that even if sometimes there is delay in payments to the tanker owners, but the government does make sure that they are paid on regular basis. The provincial government has also allocated supplementary budget to handle the crisis.

Like livelihood, water, electricity, sewerage, sanitation, education and health facilities, the citizens are also concerned about the job opportunities, Gwadar Port and CPEC related projects are expected to bring.

“As part of the development, Gwadar will then require trained and technical workforce but when our youth is not provided with adequate educational and training opportunities, there will be people from elsewhere to operate the emerging technology and handle the firms. So far, there is no clear policy by the government for the local people of Gwadar and their rights,” says Barkatullah.

In January 2016, a multi-party conference (MPC) was held in Islamabad on China Pakistan Economic Corridor (CPEC). Several resolutions were approved which mainly included rights of local people of Gwadar. And recently, the dismal share of the province in development projects under the China Pakistan Economic Corridor (CPEC) were also expressed by the Balochistan government.

With all these factors, the local activists urge, it is important not to neglect the plight of the indigenous population and have clear policies and implementation to ensure that they are provided with the basic services and benefit from the future economic gains.

Published in The Balochistan Point on January 8, 2019

Internet access: The need of the hour in Makran