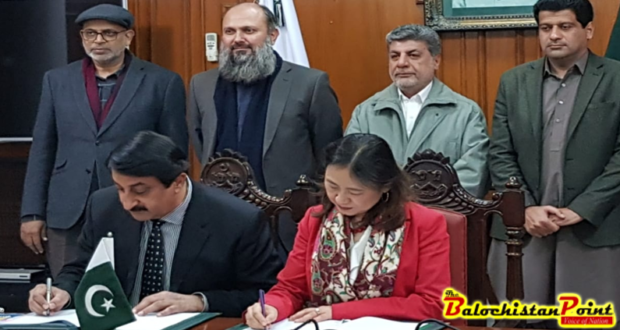 ADB to provide $107m to Balochistan for water management

QUETTA: The Asian Development Bank (ADB) and Balochistan government on Saturday signed an agreement of a $107 million loan and grant in so as to improve the irrigation infrastructure and water resource management in the province.

ADB Country Director for said that agriculture remains the backbone of Balochistan’s economy, adding that the project will introduce efficient water usage systems and practices to help farmers improve productivity and farm incomes.

The Balochistan water resources development sector project will focus on improving irrigation infrastructure and water resource management in the Zhob and Mula river basins. The two rivers irrigate vast areas of the farmland across the province.

Among the infrastructure that will be upgraded or built for the project are watershed protection, dam and command area able to hold 36 million cubic meters of water; a total of 276 km of irrigation channels and drainage canals; and facilities that will make it easier for people, especially women, to access water for domestic use. In total, about 16,592 hectares (ha) of land will be added or improved for irrigation.

The project will protect the watersheds through extensive land and water conservation efforts, including planting trees on 4,145 ha of barren land to combat soil erosion. Its output includes pilot testing of technologies like solar-powered drip irrigation systems on 130 ha of agricultural land, improving crop yields and water usage on 160 fruit and vegetable farms, and demonstrating high-value agriculture development.

Yang said that the project would also establish a water resources information system that would use high-level technology such as satellite and remote sensing to conduct river basin modeling and identify degraded land for rehabilitation.

It was also shared that the ADB would also administer two grants for the project, including $3 million from the Japan Fund for poverty reduction and $2 million from the High-Level Technology Fund. In addition, a $2 million technical assistance would help Balochistan’s provincial government improve its institutional capacity to address the risks and potential impact of climate change in the agriculture sector, as well as build a climate-resilient and sustainable water resource management mechanism in the province.

Published in The Balochistan Point on January 6, 2019

2019-01-06
admin
Previous: The looming water crisis in Balochistan requires immediate attention of the government
Next: The Plight of the Gwadar Citizens