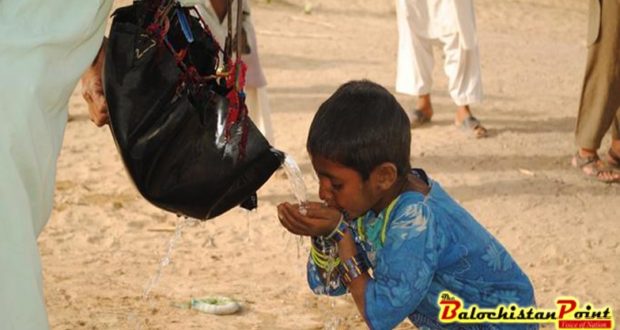 There are millions of people all over the world who do not have access to water, if they have access the water is not potable.  About 70% of Earth’s surface is covered with water and 3% of it is actually fresh water that is for the human consumption. On the entire earth, water is the most momentous thing. It is needed by microbes, animals, plants and everyone. The human body is in fact comprised of 75% of water. However, the looming water crisis in Balochistan deserves the immediate attention of the government. As in most parts of Balochistan the people are unable to get the access to clean water, since there has been no rain for long time.

Besides this, Gwadar city has been facing acute shortage of water, but no remedial measures have been taken yet. Sometimes the poor families utilize the sea water because they cannot afford to buy clean water for drinking.

According to the reports 62% of Balochistan is deprived of clean drinking water and more than 58% of its land is not able to be cultivated due to water scarcity. It makes us really woe-gone that the people of Balochistan are always left to suffer. They are deprived of electricity, water, nutritious food, healthcare facilities, education and many more to name them, but water shortage is the main problem because without it no one can survive.

While the government is trying to build a world- class port, but the city remains deprived of water and electricity. We feel disappointed that water and food are the fundamental requirements of the people, but still most of us are deprived of clean drinking water and nutritious food.

In addition, Ankara Kaur Dam was closed due to drying up because its catchment areas had not received rain water for many years. And it is a common place that most of the families buy water from the supplying tankers, which directly collect water from springs or streams and sell it to the needy families without purification.

Gwadar’s residents are compelled to buy water from the tankers, but the down-and-out people are unable to buy, because they can’t afford to buy a tanker of clean drinking water which is beyond the capacity of middle class population. In the city, manifold people are deprived of access of safe drinking water as water is the most essential element for remaining alive.

More importantly, the leaders do utter that the China- Pakistan Economic Corridor (CPEC) assists the people of Gwadar as well as the other districts of Balochistan, but these chirpy words are only dreams for Baloch to come true!

Provoking one to question why are the people of Gwadar City along-with Balochistan’s other areas deprived of drinking water and the people travel for long distances for search of water and they are holding water on their head? Is it the development of Balochistan?

According to the UK’s report at least 84 to 89 per cent of the country’s people do not have water in a great quality of consumption, due to polluted water more than 53,000 children suffer from some kinds of diseases and their health are being effected ominously. Mostly, a myriad number of children are often affected by waterborne disease and most of them loose their precious lives.

The writer is a regular contributor to Balochistan Point. He can be reached at munaj1gul@gmail.com

Published in The Balochistan Point on January 5, 2019