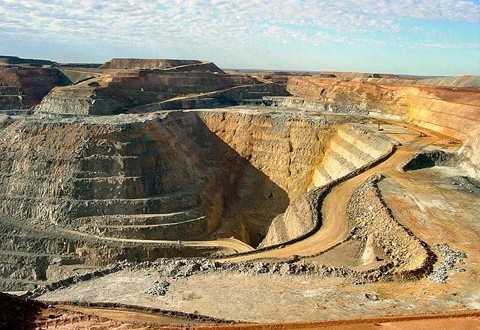 The Plunder of Saindak’s Cooper and Gold

Saindak cooper-gold mine is also included in the Baloch’s  mineral resources that mark Balochistan as a rich land. Despite existence of gold and copper with great amount and value, Baloch nation is unable to benefit from it as because Chinese exploitation of Baloch resources is continued with great assistance of state authorities and establishment. The Saindak production or so-called Baloch share has never been utilized for development of Baloch and Balochistan.

The  Saindak Copper and Gold mine is  located in Chagi district of Balochistan. Discovery of copper deposits  at Saindak  was made  in 1970s in collaboration with Chinese engineering firm and the feasibility study of Saindak  project was  started in 1975. The Saindak mine was estimated to have ore reserves of 412 million tones containing on average 0.5 gram of gold per ton and 1.5 grams of silver per ton. According to official estimates, the project has the capacity to produce 15,800 ton of blister copper annually, containing 1.5 ton of gold and 2.8 ton of silver.

In 1995, production at Saindak copper and gold mine started with the funding of Government of Pakistan. The Saindak Copper-Gold Project was set up by Saindak Metals Ltd, a company owned by the Pakistan, by the end of 1995 at a cost of PKR 13.5 billion.  In initial trial months, monthly production rate was 1700 tons of copper, 6000 ounces of gold and 12000 ounces of silver. At first the copper was to be refined in China, the technical partner in the project; it was suggested that a refinery be built at Saindak; however, after a decade it has not been done.

The Benazir government closed down the project late in 1995, saying lack of funds to continue project and low price of copper  in international market. The  Nawaz government did not take interest in starting this project. In  addition,  it is  said that state bureaucracy opposed Saindak project over building  the necessary infrastructure , including the RCD Highway section from Dalbandin  to Saindak, taking  the rail to Saindak from Taftan and other facilities. It also remained a big shock for the people of Balochistan when first time a number of Baloch people were employed. It should be noted that above mentioned development was made  merely for the Chinese interest and benefit.

The government of Pakistan In 2002, invited foreign investors to provide funding for the project and  awarded the mining project to the Metallurgical Corporation of China (MCC) Ltd under a 10-year lease due to expire in October 2012.  MCC agreed to pay an annual rent of $500,000 for the mine to the Government of Pakistan. The distribution of profits was according to a formula,  beyond ones understanding. The Chinese company took 75% the Federal government 24% and only 1% of revenue was passed onto the Balochistan Government.

Shortly, the Saindak Copper-Gold Project (SCGP) SCGP is a copper mining project that has been of no use or benefit for the Baloh people. The initial operational agreement between MCC and Government of Pakistan was for 10 years upto 15-Oct-2012. The agreement further extended for a period of 05 years i.e. up to 15-Oct-2017. MCC is running this project through its subsidiary MRDL (MCC Resources Development Company Pvt Limited) registered with Securities and Exchange Commission of Pakistan.

Unfortunately,  there is  no detailed  examination  of minerals  from  the international laboratory with the  view to know the exact ratio of copper  and gold in the minerals being extracted  from  the Saindak  mines  and there is  no idea of costly ores of  the copper  and gold  being extracted by the Chinese Company. The China has been given free hand to exploit Baloch resources. The minerals valuing billions of dollars are being swindled since the Chinese company invested only 23 million dollars and in return it holds the whole resources of Saindak project and there has not been independent monitoring in the project.

The agreement and handing over the Saindak project has always been against the will of Baloch people, even the so-called governments  have not been consult , as  last year in 2012 the federal cabinet approved a five year extension in the lease of the Saindak project till 2017.

The company claims to have paid 13.4 million dollars as presumption tax and 6 million dollars surcharges between periods of 2002 to 2012. It also claims provision of jobs to 1600 local people in mining and running the plant. The company says that it is upgrading schools and health services and provides scholarships to students of the area; however, the claims go against the reality. According to the local people the project area is a no go area for Baloch people and employed people in the project   belong to the other provinces or are non-Baloch including presence of Baloch in the project is equal to none. The people in surrounding areas of the village and district say that there is no development in any sector of the life initiated by Chinese company.  The district officials of Chagi confirm  that no money from this project has been utilized for district development.

Ransack of Saindak copper and gold proves that the federation is only interested to exploit Baloch resources with the help of China. This project could bring a great economic change   in the condition of entire Balochistan; even it did not develop the nearby villages and district in last years.

The enormous pillage of copper and gold by China is not justified from the land of Balochistan, as does not return in the shape of development or amount. However, the resistance movement in Balochistan and political struggle justifies that Baloch movement for their rights and ownership of land is right and on the basis of realism. Because the Saindak project is only a single example and we can find numbers of instances in which Baloch people are undervalued and Baloch resources are looted with both ends particularly by China.(courtesy: The Baloch Hal)

China digs Pakistan into a hole :By Syed Fazl-e-Haider

Republished in The Balochistan Point on September 7, 2013