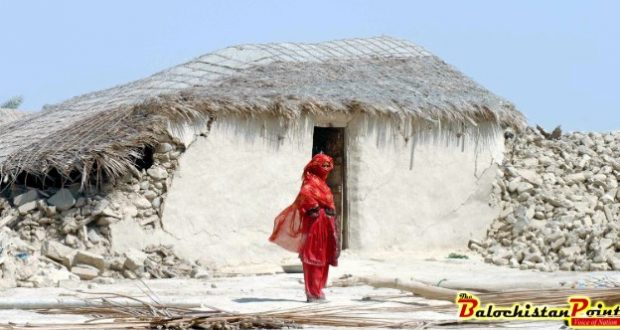 The poor daughter of Balochistan

Benazir, a 16-year-old girl from Balochistan’s gas rich Dera Bugti district, came with blood-soaked clothes and escorted by her malnourished and traumatised parents to a government hospital in Quetta.

With no health and maternity facilities her first pregnancy went wrong due to lack of healthcare facilities and the unskilled midwife’s desperate efforts to get her to deliver. Her face was pale due to excessive bleeding, exhaustion and anaemia – she was near death.

I rushed to finalise all necessary protocols. Soon Benazir’s laboratory tests revealed that her haemoglobin (hb) was 3.9 – a confirmation of severe anaemia. After massive transfusions and efforts Benazir gave birth to a daughter.

Women or mothers with hb of 3.9 are very rare in developed countries and also in the socially and economically well-off parts of Pakistan. But here in Balochistan no day goes by when I, as a doctor, don’t go through the painful reality of dealing with and treating female patients with severe anaemia.

The untold miserable story of arranging the blood transfusion was another Himalayan task for this God-forgotten Bugti family. In addition, Benazir had the rare O negative blood group.
I don’t know how these people managed to travel nearly 400 km to bring Benazir to a tertiary care hospital, how they will manage such a costly process of blood transfusion.

Benazir is safe, we managed to what we could to save her. But the battle for women like Benazir in Balochistan is far from over.

During lavish Independence Day ceremonies the music, the guns and the noise was so loud that the pain and suffering the women of Balochistan did not reach the power corridors, a stone throw away from Quetta’s main hospital.

MMR, child mortality, literacy rate, poverty and hospital bed density are some of the key factors that are used to judge the achievements of a country. Unfortunately, Pakistan lags far behind in achieving all these. And Balochistan, in particular, is the worst-hit area when it comes to MMR, CMR, literacy and health-related indicators.

Despite tall claims, fancy promises and international commitments, Pakistan is not making any headway in fulfilling these commitment. Our national Maternal Mortality rate (MMR) is recorded at 260 per 100,000 live births. The provincial figures are terribly bleak and reflect a clear discriminatory regime.

A recently launched multidimensional poverty index report made it clear that Balochistan is rapidly sliding back in all human development indicators.

The current MMR and female reproductive health demographics of Balochistan can only compete with war-torn Somalia – with MMR of 1000 and Liberia with MMR 770 per 100,000 live births.
Pakistan’s low spending on social development is also blamed for such a bleak situation in such a resource-rich province. Afghanistan is making headway in many areas and has better MDG indicators compared to those in Balochistan.

The hospital bed density (HBD) is an indicator to understand the state of health facilities in a country. Iran has 1.7 beds per 1000 population, Somalia 6.3 per 1000 population while Pakistan has only 0.6 bed for 1000 population. The situation is worse in Balochistan – and the recent Quetta incident was a glimpse of the bleak reality of the poor health structure in the provincial capital.

Pakistan needs to invest in providing care to its citizens, particularly in the health and education sectors. Unequal distribution of resources and lack of healthcare facilities in Balochistan and other remote parts of Pakistan have a direct impact on the socio-economic development of these regions.
Without equal and equitable distribution of resources and without improving governance and human security, Pakistan will remain an unhealthy country.

After MDGs, we now have Sustainable Development Goals but such important matters are hardly debated and discussed in our power corridors.

Along with the CPEC, Balochistan needs a corridor of health, education, and empowerment.
For women like Benazir in Balochistan, life is so miserable that they are unable to have a proper meal. The entire generation in Dera Bugti and in Balochistan is malnourished. A recent report on malnutrition and food poverty has disclosed that two out of three households in Balochistan cannot afford a proper meal and 83.4 percent children in the province are facing severe malnourishment.
Benazir’s daughter’s scream reminded me that with such level of poverty this beautiful soul will suffer like the other 83 percent children of Balochistan, with no access to health, education and opportunities.

Benazir is not a traditional Balochi name, so I asked her mother why she named her so. Her reply: “mun watee zagae naam Benazir kurt k ha hum Benazir a dolla zal a jorr beet…” (I named my daughter Benazir with the dream that my daughter will be like Benazir, educated and powerful).

I hugged her and told her that she is Benazir – since living and giving birth and still being alive is not an ordinary job. Though I should have told her that it’s not the name that make us great but the state, a system that provides opportunities, support and care that make us successful in our lives.
I asked her what she wanted to name the newborn baby girl; she asked me: ‘what is your name?’
I left her with tears and rushed to another patient with the same problem – with a hope that in 2034 this hospital will not see a ‘Sadia’ from Dera Bugti battling for life with haemoglobin levels of 3.9. (Courtesy: The News International)

The writer is a women’s rights activist and a doctor who works in Balochistan.
Email: drsadiaali15@gmail.com

Published in the Balochistan Point on August 17, 2016

2016-08-17
admin
Previous: Letter: Delay in Books provision to students in Balochistan
Next: Is The Housing Shortage Now at Crisis Point?