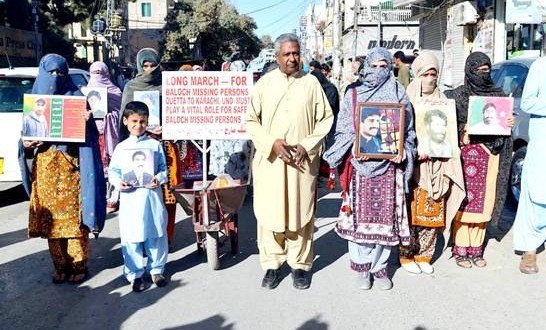 The Silence of Our Friends

After Twenty-five days and having covered a distance of 700km from Quetta to Karachi on foot, Mama Qadeer finally arrived at the Karachi Press Club on November 22. His caravan included children as young as 4 and women as old as 60. Mama Qadeer Reiki is the Vice Chairman of “Voice of Baloch Missing Persons” (VBMP) and also the unfortunate father of Jalil Reiki, who was abducted by Pakistani intelligence agencies in 2009. Jalil’s brutally tortured body was found in Mand, District Kech, Balochistan, almost three years after he went missing.

In an earlier interview, Mama Qadeer had said “When Jalil was picked up his son was only two,” “He had a hole in his heart and the doctors told us not to put him under any stress. So I kept telling him that his baba was away on business.” But when Jalil Reiki’s body was found, Mama Qadeer took his four and half year old grandson to see the mutilated body and told him who had killed his father and why.

Mama is among the hundreds of fathers from Balochistan who have received the mutilated and tortured bodies of their bright and educated sons. The caravan also includes young girls like Sami Baloch whose father, a doctor by profession, has been missing for the past four years. Another young woman, Farzana Majeed, the 29 year old sister of the missing, Zakir Majeed Baloch, is also among the marchers. Despite their bruised feet, poor health and repeated threats from intelligence agencies, these women and children are unmoved in their resolve. Needless to say, when your loved ones are being tortured in some dark dungeon, the burning blisters on your feet are the last thing you could care about.

The people in this historic procession are from a land that is also home to a significant number of Pashtuns. The Baloch and the Pashtuns have lived together for centuries.  When the British were preparing to launch an attack on Afghanistan, the Khan of Kalat – the leader of the princely state of Kalat, – refused to support the British. Willam Dalrymple in his best-selling book, “The Return of the King” writes, that when the British were moving one of their largest military battalions of the East India Company to Afghanistan, the Khan of Kalat said, “You are taking an army in, but how do you propose to take it out again”.

Despite their shared history, the Pashtuns and Baloch have, over the course of time, drifted away from one another. Their once exemplary bonhomie stands replaced by cut-throat competition and political showmanship. Many believe that this tragic schism was the result of a well-crafted plan scripted by the state. And it worked. One brother’s plight was successfully turned into the other’s benefit on the basis of an engineered animosity. By creating an imbalance of power and resources between the two ethnic groups, the brewing ground for the perfect feud was meticulously laid.

Interestingly, while we hear the news of young and old Pashtun and Baloch celebrating solidarity day together in Afghanistan each year, the similar youth in Balochistan are busy in armed clashes with one another on campuses. When Qambar Chakar Baloch, a student activist, demanded changes to the Quetta-centric admissions policy at Balochistan University for Information Technology and Management Sciences (BUITEMS) (the beneficiaries of which would have been both Baloch and Pashtun students from remote areas), he did not receive any support from his Pashtun colleagues. Qambar was later picked up by the Pakistani security forces and his tortured body was dumped outside his home town in January of 2011. If young Pashtuns had joined hands with Qambar back then, the power of his voice could have resonated much louder and garnered more attention. Who knows? he even may have been alive today.

The Pashtuns in Balochistan have seldom voiced their anger or protested on the issue of the Baloch missing persons. The recent march by the families of the victims of enforced disappearances from Quetta to Karachi also failed to receive much support from the Pashtun in Balochistan. The current distance between both the ethnic groups, Pashtun and Baloch,   is an attempt to keep the people embroiled in internal strife and conflict. This makes it doubly harder for the nationalist movement to reach its full-potential and pace. On the contrary though, it also makes it much easier to plunder the natural resources and wealth of Balochistan by the Pakistani state. Sadly though, in this deliberately-chiseled narrative (or call it a zero-sum game), thousands of Baloch men, women and children, along with their Pashtun counterparts, continue to suffer.

It is imperative that the Baloch and the Pashtuns come together in Balochistan. Instead of just looking at their own self-interests, it is about time they jointly fight against the silent but powerful forces working against them and damaging Balochistan. There is also a need for Pashtuns in Balochistan to raise their voice against these senseless human rights violations and the killings of scores of young Baloch aspirants. As Martin Luther King Junior, the champion of US civil rights movement once said, “In the end we will not remember the words of our enemies but the silence of our friends”. (Courtesy: PASHTUNWOMENVIEWPOINT)

The writer is a former 2012-13 Hubert Humphrey Fellow who has completed her professional affiliation with The Brookings Institution’s Center for Universal Education in Washington DC. She is an avid political and social commentator and can be reached at hinabaloch@gmail.com. She tweets @hinabaloch.

Republished in  The Balochistan Point on November 26, 2013