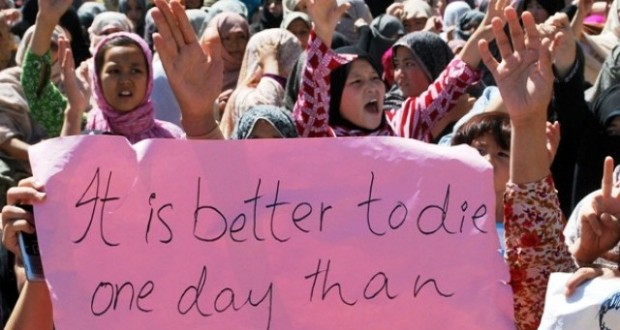 The ugly face of sectarianism in Balochistan

People from the Hazara community have, once again, become victims of sectarianism. On January 21, 2014, a suicide bomber blew himself up near a pilgrims bus and the bus caught fire. This ugly attack caused the deaths of more than 28 people and wounded 39 others. The injured and dead include children and women. This fresh attack proves that nothing has changed in Balochistan — the Hazaras and Baloch have the same luck when it comes to shouldering dead bodies.
The relatives of the murdered and a large number of people belonging to the Hazara Shia community staged a sit-in on Alamdar Road, Quetta against the incident for more than 40 hours. The affected families, Hazara political parties and religious organisations refused to bury the dead bodies, calling for the arrest of the culprits. They continued their protest in subzero temperatures until Federal Interior Minister Chaudhry Nisar Ali Khan and Information Minister Pervez Rasheed reached Quetta as per the directives of Nawaz Sharif, and assured the Hazaras that action would be taken against the perpetrators. After successful negotiations, the protesters agreed to bury the dead.
It is worth mentioning that the new year in Balochistan began with an attack on Shias on January 1 when a bus, escorted by a police van, was attacked in the Akhtarabad area of Quetta. At least two people were killed and 26 were seriously injured in the passenger bus of Shia pilgrims, which was coming from Iran.
It is assumed that Balochistan will always put up with sectarianism where Hazaras are being killed systematically because, all along, the government has failed to protect them, whether it was the Musharraf regime, the PPP or the PML-N. The aforementioned governments remained unable to control the intensified attacks on the Hazaras despite their protests in a democratic way. Hundreds of people have been killed and thousands wounded in deadly attacks over the years. A banned militant organisation claims responsibility but the government only considers promises sufficient rather than taking action against the perpetrators.
2013 remained a bloodstained year for the Hazaras when more than 325 people lost their lives and some 700 were injured. Apart from Hazara children, women and policemen, journalists also became victims in these attacks. Aside from minor attacks, no one forgets the day when, on January 10, 2013, a suicide attack killed at least 115 people and a total of 270 were wounded and when, in February, a car bomb near Quetta killed 73 and wounded at least 180 people. In 2013, following the deadly suicide attack in January, the Hazara community staged a sit-in on Alamdar Road; later their protest led to the imposition of Governor’s Rule in Balochistan and ended Nawab Aslam Raisani’s government. Unfortunately, the protests of the Hazara community have never produced the desired results.
According to the Human Rights Commission of Pakistan in 2012, “Hazaras have been uprooted from Loralai, Mach and Zhob (small towns in Balochistan province around Quetta city), over 800 have been killed since 1999 and at least 550 Hazaras have been killed from February 2008 until May 2012. For the last five years, more than 50,000 Hazaras, especially youngsters, have left Quetta city, a majority of them have managed to take refuge in other countries and nearly 300 lost their lives off the shores of Australia when their boats capsized.”
The treatment of the Hazaras in Balochistan and the increase in violence directed against them remains unchanged. Hazaras are the victims of sectarianism. Because the government claims to enforce security measures to protect this community, the government has a responsibility to forestall further violence directed at them. Although the United Nations, Amnesty International and Human Rights Watch have reported on the systematic killing of the Hazaras, no notable developments have improved their security.
The state and responsible authorities have never been serious in aiming to take measures for the protection of the Hazaras in Balochistan. The Hazaras have been let down and they hold the state and security forces responsible for failing to protect them. However, some of them say that the institutions have not failed but that they do not intend to protect them. It is time for the central government to take action against the outlaws seriously and offer as much security as is needed to protect this vulnerable ethnic group, and change the ugly face of sectarianism in Balochistan.

Published in The Balochistan Point on February 1, 2014