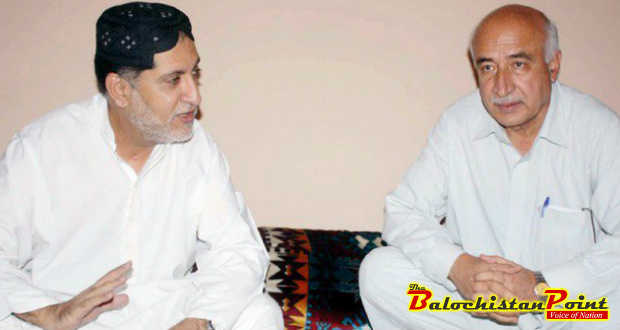 The Way Forward for Baloch Nationalists

Another eye-catching entry was seen by Akhtar Mengal after his six points in Islamabad in the form of all party conference regarding China Pakistan Economic Corridor (CPEC). BNP Mengal is making its good place among Baloch masses and Balochistan based political parties, as well as other progressive political parties throughout country. The threat of being converted into minority, compelled Mr. Mengal to convene an All Party Conference (APC) in order to present Baloch Nation’s reservations in particular and of his party’s in general in Capital. Mengal’s this most awaited initiative resulted in casting love and expectation of Baloch masses back to his party. Baloch Nation’s response to the BNP-M leadership for the CPEC issue is lively and expectable.

Baloch and Pashtun Students outside Balochistan, for the very first time seem to be satisfied and hopeful from BNP leadership, and further they are building good expectations that leadership will raise its voice in support of National party against fake domicile issue in a far depth, which was highlighted by Senator Kabir Mohammad Shahi in the Senate time and again, hope will take a stance soon.

An ex-parliamentarian appreciated Mengal by making a comment that, it is 100% a positive initiative taken by Mr. Mengal, which definitely raised the expectations of Baloch nation, in fact, it had to be convened before, but , still it’s not too late.

A female student, Hani Baloch, from Turbat said that Baloch will never let the CPEC to be functional, if it goes against our interests. It is a good measure taken by Mengal and his party leadership, but I am obsessed that, why our leaders do not learn from Punjab. Why Dr. Malik was in a smooth slumber while Shahbaz Sharif was busy in sending students from Punjab to China for gaining Technical education.

So, further I interviewed a M.A pass Baloch fish monger from the coastal belt that has his 13 years old son working at his shop. Disappointedly, he commented that, nothing can be seen through open eyes; if one can see! That is the closure of many private schools, the blockade of the educational beam by the heinous murder of Askani and the closure of Delta Center in Turbat, were the most developmental and social murder in Dr’s Tenure. I am quite astound, what the hell, more Federal, provincial government and china want developments in Gwadar, if they fail to provide potable water to its residents.

No doubt Dr. was an easy-going gentle yes-man – Citizen

In fact; they are no more true nationalists, he beamed while saying that they will remain the so- called nationalists until they would have filled their black hole like bellies up. Further he said, the slogans of developments are nothing more than political gimmicks and the recent educational emergency call was a political joke against the efforts and hard works of Baloch students. He concluded with “No doubt Dr. was an easy-going gentle yes-man, who spent his proposed tenure in accepting the province policies according to establishment and federal. But, what now, he is complaining his monstrous injustice of powerlessness bestowed by (cute federal and just Establishment) to the Baloch masses, so far so good, to derive some self-satisfaction.”

“The blockade of the educational beam by the heinous murder of Askani and the closure of Delta Center in Turbat were the most developmental and social murder in Dr’s Tenure.”

It is the need of time for all Balochistan based political parties’ leaderships to unite, to defend the provincial interest. They need to sow the seeds of love and acceptance for each other to secure the future of Balochistan and its natural resources. It is the time for Akhtar Mengal and Dr. Malik to lead the front leadership. Akhtar Mengal must not let his Tribal ego to dominate the true belief of nationalism. Hasil Bizenjo should have to see far further than the Mengal party and Bizenjo party, they should think of a single mass democratic party, which will ensure Mass Security. NP and BNP Mengal have the potentials to secure Balochistan and Gwadar, only the Unity is belated.

CPEC demands Technicians, Engineers Computer operators and many more; the leadership must play its pivotal role in fostering the Baloch Youth towards these fields by introducing technical institutions and opening the doors of opportunity. United you own Gwadar, Divided you lose Gwadar.

Author is a student of History and journalism in GC University Lahore.