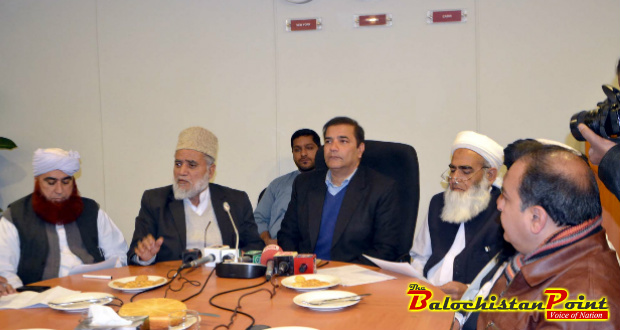 Quetta:Ulema of Provincial Polio Task Force have condemned the killing of security forces deployed on the security of the polio workers, terming such acts as conspiracies to maligning Islam and Pakistan.

Coordinator EOC, Dr. Saif-ur-Rehman was also present on the occasion.

Renowned Religious scholar Dr. Atta-ur-Rehman said that Quran guarantees the protection of human life, property, belief and dignity, adding that not only this but four heavenly books and more than 100 heavenly manuscripts also give the same lesson of protection of human rights, belief, life, property and dignity. He said that Moses (PBUH) also waged jihad against the pharaoh who was an assassin of the children, adding that Islam doesn’t allow the killing of our own children on the pretext of America, European Union and Shakil Afridi.

He was of the view that as many as 0.4 million children die each year in Pakistan due to lack of preventive inoculation, adding that if someone has any reservations against polio drops, they should come up with their objections to discuss them.

Ulema were working in their Union Councils under the banner of Ulema Task Force to convince the masses about the efficacy of the program.

He said that 70 Ulema were supervising the task force include Moulana Muhammad Hanif Jalandari, Moulana Rafi Usmani, and many others, adding Shariah Doesn’t allow the parents to kill their children or leave them prone to any such diseases which may leave them handicapped or cause their death.

Moulana Anwar ul Haq Haqqani, speaking on the occasion, said that the halting of prevention methods initiated by world health organization are a matter of embarrassment and shame for the state of Pakistan and everyone of us, adding that if someone has any reservations about these drops, they should consult Madrassahs such as Jamia Azhar, Dar ul Uloom Deoband, read the decrees of Harmain Shareefain. He said that despite the decrees of such authorities if someone has any reservations, it is definitely a conspiracy against Islam and Pakistan.

He also paid tribute to the Police martyrs and demanded from the government to capture such elements and award them punishments. He said that despite the decrees of 160 Ulema, having differences on this matter is appropriate, adding as many as 679 refusal cases have been convinced in Sariab only.

Mufti Abdul Baqi also condemned the attacks on Polio workers and termed such actions as atrocity against humanity. He also demanded strictest punishment for elements who were involved in killing of the police personnel deployed on the security of the polio workers.