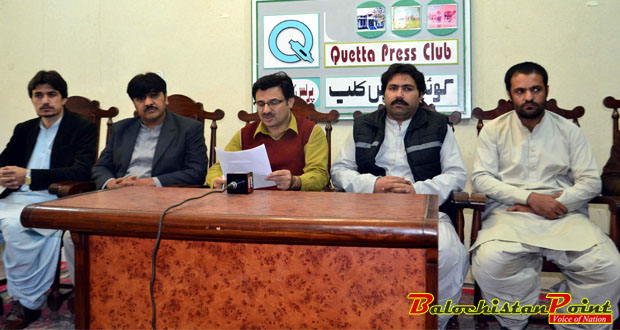 Quetta – Civil Society Balochistan has demanded that Balochistan government should establish trauma centers at all major highways to avoid loss of life in case of accidents, while addressing a press conference in Quetta Press Club on Thursday.

Addressing the press conference, Civil Society Balochistan convener Sami Zarkoon and member Shah Jahan Baloch revealed that there is not a single trauma center on all highways of Balochistan.

Shah Jahan Baloch said that there is no proper ambulance service for the victims of highway accidents and due to delay in reaching hospitals many people lose their lives and others suffer permanent injuries for life times. In addition to that seriously wounded victims also suffer pain for lifetime due to not getting proper attention on right time.

Mr. Shah Jahan Baloch revealed that on last Sunday group of five youngsters suffered a highway accident near Mach while travelling to Bolan from Quetta. He further added that initially all five injured people were transported to Mach hospital where the state of hospital was poor.

Khurshid Ahmad, one of the injured people in the group said in press conference that there were no medicines in the Mach hospital and staff brought some medicines from their homes.

After that the victims were referred to Quetta and during the journey to Quetta, one of the injured persons Kamran Mengal lost his life near Hazar Gunji, said Shah Jahan Baloch.

Shah Jahan Baloch lamented that Quetta-Karachi highway is an international highway as its used for NATO supply transportation for last 13 years but still it lacks basic emergency healthcare systems due to incompetence of political rulers.

Civil Society Balochistan representatives said that a lot of passengers lose their lives on highway accidents in Balochistan due to lack of emergency medical aid, lack of availability of proper ambulance service with trained staff, ill-trained health staff posted in hospitals and almost no awareness among public transport staff about emergency situations.

Through the Press Conference, Civil Society Balochistan demanded from government to establish trauma centers on all highways of the province including RCD highway, Makran coastal highway, Quetta-Sibi highway, Quetta-Zhob and Quetta Chaman Highway.

It was further demanded that trauma centers should also be equipped with international standard life saving ambulances, public transport staff needs to be properly trained to deal with medical emergencies and government must treat all patients free of cost who have suffered injuries on highway accidents.

Civil Society Balochistan demanded from Chief Minister, Health Minister and Health Secretary of Balochistan to establish trauma centers or else it reserves the right to strongly protest if the demands are not met.

Published in The Balochistan Point on January 14, 2016